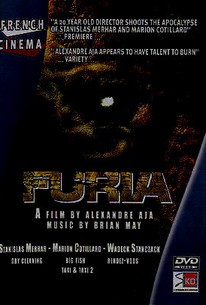 Combining romance, science fiction and a political parable, Furia takes place in the future, after an oppressive government, which has shut down all political opposition, recognizes art as a means of free expression -- and therefore bans painting on public surfaces. Theo (Stanislas Merhar) is an activist artist who creates paintings on walls under the cover of darkness, despite the fact his bother Laurence (Wadek Stanczak) works with the local government. Their father Aaron (Pierre Vaneck), a local barkeep, used to paint, but when he was caught, the color was taken from his eyes and now he can only see in monochrome. When Theo meets another rebel artist, the lovely Elia (Marion Cotillard), he's immediately smitten, and when she's arrested and subjected to torture, Theo tries to have himself caught so he can be with her (and protect her) behind bars. Furia was adapted by director and co-screenwriter Alexandre Aja from a short story by Julio Cortazar, an Argentinian refugee who fled to Paris in the era when rebellious citizens were "disappearing" -- 30,000 in all. ~ Mark Deming, Rovi

There are no critic reviews yet for Furia. Keep checking Rotten Tomatoes for updates!

There are no featured audience reviews yet. Click the link below to see what others say about Furia!