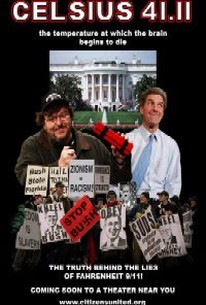 Celsius 41.11 was an attempt by conservative pundits and politicians to respond to the runaway box-office success of Michael Moore's Fahrenheit 9/11. The film features interviews with such notable public figures as Fred Barnes, Michael Medved, Fred Thompson, and Charles Krauthammer and offers a dissection of the democratic party's 2004 nominee for president, John Kerry.

Any way you look at it, November 2 simply cannot arrive fast enough.

As a return volley to Moore's cinema, Celsius shares Moore's blatant agit-prop but none of his humor or entertainment sense.

Celsius 41.11 is so bad it's almost like performance art, or those cheap records from the '60s, where the Chipmunks sing the Beatles' greatest hits.

The even faintly informed will see only a cut-rate vision of flabby white men defending their own bloodthirsty opportunism.

It's not that Moore's film doesn't deserve an argument. But it does deserve a more thoughtful one.

Now that we've had the four more years of Bush that the movie was designed to encourage ... Celsius 41.11 seems pretty sad and naive.

A grim slice of ultra-conservative agitprop...probably the worst example of the activist documentary to appear this election season.

A bland documentary if ever there was one.

It's about as emotional as a PowerPoint presentation.

If Knoblock expected his film to change minds, as Fahrenheit 9-11 seems to have done, he really should have added more humor

Chetwynd and company at least attempt to score their points honestly, avoiding the spurious or ad hominem attacks of those for whom many little lies somehow constitute fair play in November's battle against the Big Red One.

A hard hitting, fact based documentary, Celsius 41.11 examines the anti-Bush movement as well as several of the controversies that surround 2004 Democratic presidential nominee Sen. John Kerry. It begins by analyzing the charges made against President George W. Bush, such as stealing Florida and voter suppression in the 2000 election, and lying about WMDs (Weapons of Mass Destruction) in Iraq. Particular attention is given to leading Bush critic Michael Moore and his propaganda film Fahrenheit 9/11; debunking its numerous lies and inaccuracies (such as the Afghanistan oil pipeline). The film then examines Sen. John Kerry and the criticisms levied against him about his Vietnam service and anti-war activities, and his history of "flip-flopping" on national defense issues. A number of experts and political commentators are interviewed and offer rather astute analyses. However, the production values are kind of weak and the narrative is a little uneven; lacking a cohesive throughline tying everything together. Still, while it has some rough edges, Celsius 41.11 presents a compelling (and rational) defense against the liberal conspiracies that are inflaming political divisiveness.