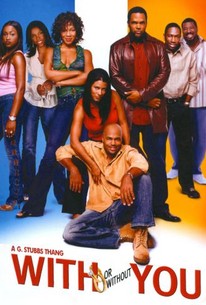 A guy who's having jitters about his relationship ends up polarizing nearly everyone he knows in this comedy. Robert thinks his life is just the way he wants it until his girlfriend announces one day that she's going to be having his baby. While she wants to get married, Robert isn't sure he wants to make that commitment. When he shares his predicament with his buddies, most of them tell him to stand his ground and are willing to back up their opinions; however, her friends are just as adamant in their support of her, and soon a teetering relationship turns into a battle of the sexes. With or Without You was the first feature film from writer and director G. Stubbs.

Rodney Perry
as Guard
View All

Critic Reviews for With or Without You

There are no critic reviews yet for With or Without You. Keep checking Rotten Tomatoes for updates!

There are no featured reviews for With or Without You at this time.

With or Without You Quotes