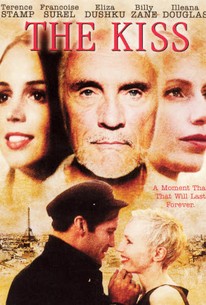 In this independent romantic drama, Cara Thompson (Francoise Surel) is a young woman who has recently landed a job at a publishing house. Cara's job is to read manuscripts, most of which aren't very good, but by chance she runs across a novel which had been submitted 20 years before. Cara is struck by how good the manuscript is, but the love story has one significant flaw -- the novel has no ending. Over the objections of her boss (Illeana Douglas), Cara sets out to find the author, and discovers Philip Naudet (Terence Stamp), an aging man who gave up on his literary career years before. Can Cara persuade him to give his book an ending, and his life as an artist a second chance? The Kiss also stars Eliza Dushku and Billy Zane; leading lady Francoise Surel's performance earned her the Best Actress award at the 2003 San Diego Film Festival.

Steven Gilborn
as Mumford
View All

Critic Reviews for The Kiss

There are no critic reviews yet for The Kiss. Keep checking Rotten Tomatoes for updates!

There are no featured reviews for The Kiss at this time.