The Life and Death of Peter Sellers2004 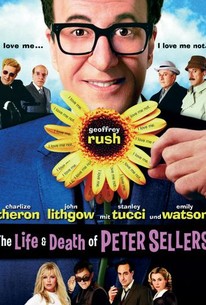 Critics Consensus: The Life and Death of Peter Sellers struggles to truly capture its subject's singular genius, but remains a diverting tribute -- and a showcase for the talents of Geoffrey Rush.

Critics Consensus: The Life and Death of Peter Sellers struggles to truly capture its subject's singular genius, but remains a diverting tribute -- and a showcase for the talents of Geoffrey Rush.

Critic Consensus: The Life and Death of Peter Sellers struggles to truly capture its subject's singular genius, but remains a diverting tribute -- and a showcase for the talents of Geoffrey Rush.

The Life and Death of Peter Sellers Photos

The often-troubled life of one of the greatest comic actors in the history of the British cinema provides the basis for this biopic. Peter Sellers (Geoffrey Rush) was raised by a domineering mother (Miriam Margolyes) and meek father (Peter Vaughan), and at an early age discovered he liked to hide behind the emotional curtain of playing a character. In time, Sellers put this skill to use as an actor, and discovered he had a great gift for comedy. In the late '50s, Sellers rose to fame on the wildly popular radio series The Goon Show alongside Spike Milligan (Edward Tudor Pole) and Harry Secombe (Steve Pemberton), but as his success on radio gave way to stardom on the big screen, Sellers' ego began to get the better of him. While working on a film with Sophia Loren (Sonia Aquino), Sellers fell in love with the great Italian beauty, and eventually left his wife Anne (Emily Watson) to pursue her; when it became clear that Loren wanted nothing to do with him, Sellers fell into an affair with her stand-in instead. Professionally, Sellers career hits a new high when he agrees to take a role in a picture being directed by American filmmaker Blake Edwards (John Lithgow) called The Pink Panther, and personally he finds a new love with the beautiful Britt Ekland (Charlize Theron). But Sellers' mood swings eventually put paid to their marriage, and while he finds commercial success as a funnyman onscreen, he achieves little in the way of happiness or respect. Produced for the American premium cable service HBO, The Life and Death of Peter Sellers was screened in competition at the 2004 Cannes Film Festival.

Critic Reviews for The Life and Death of Peter Sellers

The film is awash with psychedelic visuals, '60s cinematography and a dizzying mishmash of devices reminiscent of iconic films like Dr. Strangelove and The Pink Panther. However, like [Peter] Sellers himself, Life and Death lacks genuine personality.

... as exhausting as it obviously is to play or be Pagliacci, by now it is just tiresome to sit still for yet another sad clown without a scintilla of surprise or insight.

We get movie scenes within movie scenes, and Rush as Sellers breaking character to become Sellers' mom or Edwards, commenting on Sellers, and it all draws too much attention to itself.

Sustains interest most of the way, but combination of an unsympathetic central figure and patchy recreation of events involving numerous famous people makes for an ambitiously told life story that finally doesn't cut it.

While In Competition entry The Life and Death of Peter Sellers is a wonderfully entertaining film, the one thing that's missing is Sellers' singular ability to be hilarious.

The film makes you care so little for its subject that you might be compelled to turn it off were it not for Rush's valiant mimicry.

"The Life and Death of Peter Sellers'' is the rare celebrity bio that rises above its limitations to approach the magic of its subject matter.

It has all of the ingredients to be a cunning interrogation of the form of a biopic, [or] a listless, unenjoyably prescriptive embodiment of the same, and it is in the end neither.

"There was no real Peter Sellers"... As a theme, it smells of the tired cop-out, somewhere in the same clubhouse of desiccated phrases as "I love you, but I'm not in love with you" and "In a crazy world, only the mad people are sane."

A very good biographical picture of a human being who made people laugh, but could never find the humor in his own life.

As a showcase for Geoffrey Rush, though, Life and Death is more than worthwhile.

Audience Reviews for The Life and Death of Peter Sellers

Effective, captivating biopic on Peter Sellers, I thought that the film was superbly acted and directed, and it ranks among the finest biopics that I have seen. Peter Sellers was one of cinema's most gifted talents, and his legacy is unique, here he is brought to life in a splendid and remarkable performance by actor Geoffrey Rush, who delivers one of his career defining roles as the great actor. The film chronicles the career of Peter Sellers and it shows his troubles behind the scenes. Peter Sellers was a talented actor, and Rush is perfect for the part. He really makes the role his own, and it's hard to imagine anyone else in the part. Here we see key moments in Sellers career such him making Dr Strangelove, making the Pink Panther films and marrying actress Britt Ekland. The Life and Death of Peter Sellers is an engaging drama, one that is enjoyable from start to finish. The film is well worth your time and it will surely appeal to fans of the late actor anyone looking for a great drama to watch. At times the film does have a few weak moments, but overall due to the strong performances, the film overcomes them and it's an enjoyable affair well worth your time. Geoffrey Rush is a terrific actor, and here he steals every scene that he's in. Overall, this is a solid film, a wonderful and rich biopic that is well crafted, acted and directed. If you're looking for an entertaining biopic, then this is sure to delight you. The film has its imperfections of course, but it does possess some powerful and memorable performances with great storytelling to make it an entertaining and pleasant two hour viewing experience.

A shocking and sad movie to Peter Sellers' fans.

The Life and Death of Peter Sellers Quotes