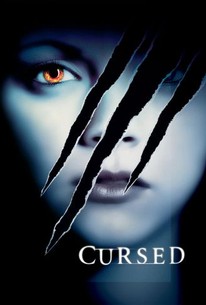 The team behind the Scream trilogy, director Wes Craven and screenwriter Kevin Williamson, present another entry in the teen-horror genre with Cursed. Starring Christina Ricci and Jesse Eisenberg, the film tells the story of two siblings who have to battle a werewolf that has been wreaking havoc on their neighbors, just as they learn that they might be marked with "the sign of the beast," and may become werewolves themselves. Along with Shannon Elizabeth and Judy Greer, Cursed also co-stars Dawson Creek alumnus Joshua Jackson, as well as R&B star Mya. -- (C) Rovi

Scott Baio
as Himself

Craig Kilborn
as Himself

Lance Bass
as Himself
View All

Cursed is no Scream, but it is at least a healthy yelp.

Genre fans and newcomers alike should skip this monstrosity and go rent Ginger Snaps instead.

Makes you long for the days when teenage werewolves were beady-eyed, slavering versions of hairy-palm jokes.

The scariest thing in the movie is a cameo by Scott Baio.

The special effects are particularly lame, and an insult to the proud werewolf tradition of An American Werewolf in London or the even better The Howling.

The scariest thing about this movie is the incredible waste of once-vital talent.

The big transformation scene was like watching a cartoon Popple emerge

A film that is overshadowed by its admittedly tumultuous production history and horror stories of studio interference. It's still not a good movie, though.

Curse is hip, modern and simple as it retells the classic werewolf legend.

This is "Scream" werewolf style...

[img]http://images.rottentomatoes.com/images/user/icons/icon14.gif[/img] Bringing nothing new to the werewolf film that hasn't been done before, i'm surprised at how much I enjoyed it. I really loved seeing Christina Ricci and Jesse Eisenberg together. They are a terrific acting pair and they are among the most positive aspects of the film. There's also a lot of good jokes and a few scary moments. Although not a classic werewolf film like Lon Chaney Jr's The Wolf Man that helped inspire it, Cursed is the best cheesy movie i've ever seen.

I am actually not really a Christina Ricci fan nor werevolves Movie but this was not Bad.

Not the most exciting horror movie. Pretty dull in the first half, seriously considered switching it off, but decided to stick with it. Can't honestly say I am glad that I did, but it did pick up. The cast is decent, especially Christina Ricci and Judy Greer, (she was actually pretty funny when she got going). I think this was meant to be funny more than scary, though quite honestly, it falls flat in both directions.

Wes Craven's "Scream" take on the Werewolf horror subgenre, but it isn't quite as successful as his spoofing of the slasher genre. The special effects are cheesy and bring attention to themselves at all times, pulling you out of the experience. This makes it harder to be scared or care about these characters. Add in lame dialogue and a predictable plot and you have an a recipe for disaster. Thankfully the lively performances from Jesse Eisenberg and Christina Ricci alleviate what could have been a horrendous movie. It has some B movie charms, although the movie runs out of steam way before the end. I kept thinking it was close to ending and more plot points and characters just kept popping up out of nowhere to reveal their twist (kind of like Scream did, only those were good twists that weren't annoying). It got very repetitive and I almost shut it off. It was moderately entertaining for the first half, before all of the repetitiveness and cheesy special effects took over. There's plenty of rumors about studio interference though, so maybe there's a good movie somewhere in Wes Craven's mind that never made it to celluloid. Whatever the case may be, the movie isn't successful and will be remembered as one of the horror masters low points.