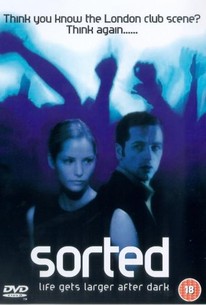 After his attention-getting turn in the London stage production of The Graduate, actor Matthew Rhys took the lead in Sorted, a British clubland thriller directed by Alex Jovy. Rhys plays Carl, an attorney who travels to London upon hearing of his brother Justin's sketchy drowning death in the Thames River. Upon investigation, Carl tracks down Justin's circle of raver friends and club-owning acquaintances, including his girlfriend Sunny (Sienna Guillory), the megalomaniacal promoter Damian (Tim Curry), and his sex-for-hire friend Tiffany (Fay Masterson). As he becomes ensconced in the city's rave culture, the usually reserved Carl eventually submits to it and finds himself at the center of a dangerous drug operation. An Academy award nominee for his 1998 short Holiday Romance, Jovy is no stranger to London's club scene; he was once a promoter himself. ~ Michael Hastings, Rovi

The flick's got energy and style to spare, but very little in the brain and logic departments.

Our involvement in the drama is undermined and the movie self-destructs.

My predicted rating: 2.5 My advice here is to not judge the dvd by it's cover, firstly Kelly Brooke is in the film for around a minute or two and secondly it's the unknowns in this film that make it a watchable film. Tim Curry (the biggest name in the film) is possibly the least believable character in an otherwise relatable club culture. Any past or present Clubbers out there, will probably appreciate the Club shoots, the characters it attracts and the way of life. I do question whether the main character would really be so naive? But who knows, perhaps? This was definitely better than expected for me as long as you take it for a low budget film with perhaps not quite the complexity of plot it tries to be.