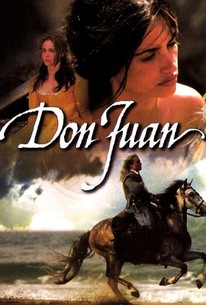 Actor Jacques Weber made his directorial debut with this film adaptation of Don Juan written in 1665 by Moliere (1622-1673). In early 17th-century Spain, two women (Penelope Cruz, Ariadne Gil) believe Don Juan (Weber) when he promises marriage to both, but they soon are left to ponder his whereabouts. However, the brothers of Elvire (Emmanuelle Beart), also abandoned by Don Juan, are out for revenge. Musical interludes (a cappella chorales, guitar) are by Bruno Coulais. After Moliere faced clerical opposition to Tartuffe (1664), it was banned, and he then wrote Don Juan, also subjected to continual attacks. For more on Moliere and Don Juan, go to the summary of Frederick Wiseman's La Comedie Francaise ou L'amour Joue (1996).

For a while, you can buy that this Don Juan could conquer a few women, but he's far too dull to be the most notorious scoundrel of all time.

Weber is about as far from Don Juan as I can imagine, and he comes across as an overgrown, geriatric, hairy monster

There are no featured audience reviews yet. Click the link below to see what others say about Don Juan!