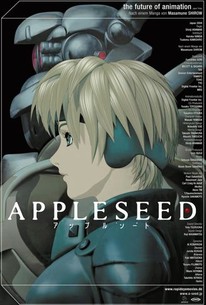 Masamune Shirow's celebrated manga of the fusion of humans and technology in a world devastated by war has been given a new and visually impressive adaptation in this anime drama. In the year 2131 A.D., Deunen Knute (voice of Ai Kobayashi) is a female warrior for hire who, after encountering her former lover Briareos (voice of Jurota Kosugi), discovers he's not the man he once was -- he's now part human and part robot. As Deunen and Briareos venture into the high-tech city of Olympus, they meet Hitomi (voice of Yuki Matsuoka), who is a member of a genetically engineered race of strong and intelligent beings who have taken over rule of the city. They have not done so without resistance, and Deunen and Briareos join forces with Hitomi and her cohorts when rebels launch an attack on the city. But while she defends Olympus, Deunen begins to suspect she has a greater alliance to those who wish to defeat Olympus than those who defend it. Appleseed (aka Appurushido) was previously filmed in 1988; this version incorporates new digital animation technology which combines the look of rounded, three-dimensional images with the visual style of the traditional pen-and-ink process. ~ Mark Deming, Rovi

Yuki Matsuoka
as Hitomi
View All

The stock characters and leaden stretches of expository dialogue are welcome evidence that there's still no computer program capable of telling a decent story.

Shut your brain down for optimal viewing pleasure.

It's an impressive effort, packed with ideas and good action scenes, but still trots out a clichéd plot about a super-soldier babe, a race of meek artificial people, giant robot suits, confusing conspiracies and a lot of explosions.

There is plenty to admire from a technical and artistic standpoint.

Newbie viewers will be left twiddling their thumbs while waiting for Deunen's next bout of butt-kicking action sequences.

It's an exceedingly brilliant combination of future shock set-up and old school moralizing, a deconstruction of what it means to be human rendered in tech tones so slick that you often forget you're watching a cartoon.

I really wish I could have liked this more.

the viewer who abstracts away from the more adolescent elements of plot will find that Appleseed has plenty of ideas at its core to keep the mind stimulated.

With all that gorgeous imagery, you'd think the filmmakers would have found a way to tell the story visually without using mountains of expositional dialogue.

The filmmakers are too busy trying to justify their futuristic world, and not enough actually exploring it.

With so much going on in every frame, Appleseed is one of those anime projects that shouts you to sleep.

Shinji Aramaki's Appleseed is one sci-fi animation that's on its game.

The first 5 minutes is all action and no dialogue and if there is one way to hook the audience, that is it. From there on out, the futuristic story pushes forward with a nice pace and satisfactory plot details.

The action keeps coming at opportune times with highly stylized sequences and choreography. Visually, Appleseed looks great. The cel-shading for the characters is a nice mix with the heavy reliance on CG for the film's setting.

Ai Kobayashi provides some matching voice-work for Deunan, the heroine. Jurota Kosugi and Yuki Matsuoka also deliver some solid voice-work for their characters.

All in all, Appleseed is a well rounded futuristic anime and a recommendable 100 minute watch.

After a world war devastates the Earth a Utopian city of the future is the subject of a power struggle between the benign genetically engineered clones and suspicious human military that inhabit it. Appleseed is 100% Japanese Anime in that is literally a Manga comic brought to life with all their inherent strengths and weaknesses. The visuals are absolutely glorious; the opening which can best be described as a Wachowski inspired take on the future scenes of The Terminator and climactic battle sequences are absolutely breathtaking. The CGI may be a little dated in the fast moving world of technology, but this is an example where computers are used in an inventive and creative way, rather than painstakingly trying to recreate reality; I personally could not give a crap whether every hair on a characters head moves realistically or not. This combination of cel-shaded characters and fabulous Japanese production design is far more pleasing to my eyes. The action scenes are brilliantly done, directed in a frenetic and thrilling way and yet are also very clear and easily followed. Bay, are you listening? Unfortunately, as usual the long-winded "explanations" that link these superb sequences tend to be overly convoluted techno-gibberish but the astonishing visuals and action make up for the shortcomings in the plot. If you want some robot-orientated ass kicking without the Bayisms and bimbos, this should be your first port of call.