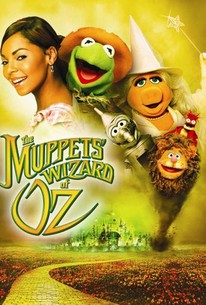 L. Frank Baum's enduring fantasy story gets a new and very funny spin in this made-for-TV comedy. Dorothy (Ashanti) is a young woman who works in a diner in Kansas owned by her Aunt Em (Queen Latifah) and dreams of one day making it big as a singer. When a tornado makes its way through the trailer park Dorothy and Em call home, the young woman is spirited off to a magical land known as Oz, where she accidentally kills the most wicked witch in the land. Dorothy, however, isn't so sure she wants to stay, and sets off to find a wizard who might be able to help her. As Dorothy searches for the wizard's castle, she makes some friends along the way -- a scarecrow (Kermit the Frog, voiced by Steve Whitmire), a cowardly lion (Fozzie Bear, voiced by Eric Jacobson), a combination robot and computer made of tin (The Great Gonzo, voiced by Dave Goelz) -- but she also has to fend off The Wicked Witch of the West (Miss Piggy, voiced by Eric Jacobson), whose sister fell victim to Dorothy upon her arrival in the strange new land. Featuring most of the best-known Muppet Show characters, The Muppets' Wizard of Oz also features guest appearances by Jeffrey Tambor, David Alan Grier, and Quentin Tarantino.

Steve Whitmire
as Kermit the Frog

Dave Goelz
as Gonzo the Great

Quentin Tarantino
as Himself

Critic Reviews for The Muppets' Wizard of Oz

The animated section in the middle is especially hard to watch

...the nadir of the Oz adaptations...

Raucous Muppet spoof of a classic. Tweens and up.

It's a real turkey.

It's not on a par with the Muppet movie madness of old, but it's darn close.

We're a long way from the creative energy, heart, and charm of Henson's Muppet movies, even though I'm not ready for the Henson Company to stop trying.

When you dig down and actually find (and watch) the new Muppet material, some of the magic is still there.

Something's gone horribly wrong at Muppet Central, and it's high time somebody fix it.

Audience Reviews for The Muppets' Wizard of Oz

They ruined the movie and the Muppets.

the muppets take there ride on the ride with this wizard of oz remake and the result is a wonderful, funny, entertaining, and fun for the whole family film

Ashanti is a pretty terrible actress. But I find it hard to really dislike anything that involves muppets. Though i still don't get why Toto turned into a Latino King Prawn.

The Muppets' Wizard of Oz Quotes