Elvis Has Left the Building2004 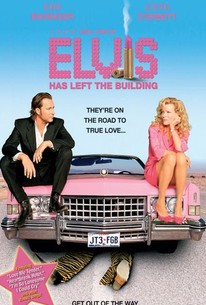 Elvis Has Left the Building Photos

One woman's unusual relationship with rock & roll's greatest icon leads her into an unexpected romance in this comedy. Harmony Jones (Kim Basinger) saw Elvis Presley in concert when she was a child, and the event had a profound impact on her, as she communicates with the youthful spirit of the King of Rock 'n' Roll on a regular basis. However, Harmony has notoriously bad luck with Elvis impersonators, who tend to drop dead when she's around. After accidentally running into a carload of Elvis tribute performers, Harmony abandons her career selling cosmetics door to door and hits the road, hoping to outrun the lawmen who are now on her trail. As Harmony roams the highways, she meets Miles Taylor (John Corbett), a lawyer from New York City trying to escape some troubles of his own. Directed by Joel Zwick, who made the surprise hit My Big Fat Greek Wedding, Elvis Has Left the Building also stars Annie Potts, Sean Astin, and Billy Ray Cyrus.

Dan Cravens
as Stand-in
View All

Critic Reviews for Elvis Has Left the Building

Elvis is one continuous groaner of a comedy.

...it's easy enough to see why [the film] never quite made it to theaters.

When it comes to Hollywood's ability to pay homage to one of the world's greatest icons, Elvis has really left the building.

Audience Reviews for Elvis Has Left the Building

There are no featured audience reviews yet. Click the link below to see what others say about Elvis Has Left the Building!

Elvis Has Left the Building Quotes