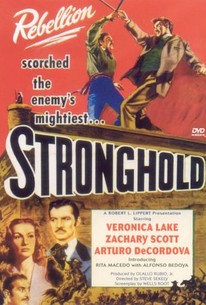 Produced in Mexico, Stronghold was distributed in the U.S. by Lippert Pictures. The studio hoped that the presence of American film stars Veronica Lake and Zachary Scott would prove beneficial at the box-office. Set during Juarez' revolution against Austrian emperor Maximillian, the film casts Lake as Mary Stevens, a wealthy American visitor who is kidnapped by gentleman bandit Don Pedro Alvarez (Arturo de Cordova) and his gang. Alvarez plans to use the ransom money to help finance the revolution, but Mary manages to orchestrate governmental resistance against the bandit's schemes. Eventually, however, she realizes that Alvarez is a man of honor and patriotism. Conversely, Don Miguel Navarro (Zachary Scott), the "heroic" overseer of a silver mine owned by Mary, is actually a double-dyed villain, finally showing his hand in the film's spectacular finale.

An awkwardly made historical revolutionary film about the Mexican rebellion against the Austrian emperor Maximillian.

There are no featured reviews for Stronghold at this time.