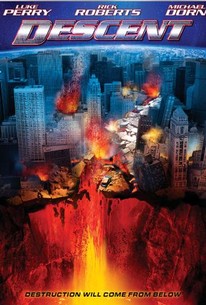 As Earth literally begins falling to pieces, it's up to a team of crack scientists to dive deep into the mantle and patch up the planet in this sci-fi-adventure starring Star Trek: The Next Generation's Michael Dorn and Beverly Hills 90210's Luke Perry. Vast crevices large enough to engulf entire cities have begun appearing on the surface of the planet, and if something isn't done fast, the population faces an unprecedented catastrophe. With rumors of a government conspiracy swirling among the population, a group of fearless scientists agree to descend to the deepest depths of the Earth to find out what's causing the apocalyptic planetary shifts.

Martin Roach
as Man in Black

There are no critic reviews yet for Descent. Keep checking Rotten Tomatoes for updates!

There are no featured audience reviews yet. Click the link below to see what others say about Descent!