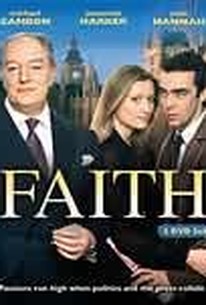 A torrid extramarital affair sends a government official scrambling to salvage his career in this drama starring Michael Gambon and John Hannah and directed by John Strickland. Peter Moreton (Gambon) is a high-ranking government official with a lot to lose, and when his daughter purposefully reveals her father's indiscretion to a reporter she is dating, the ensuing media frenzy threatens to reveal his unseemly lifestyle to all of Britain and put an end to his privileged lifestyle. ~ Jason Buchanan, Rovi

There are no critic reviews yet for Faith. Keep checking Rotten Tomatoes for updates!

There are no featured reviews for Faith at this time.