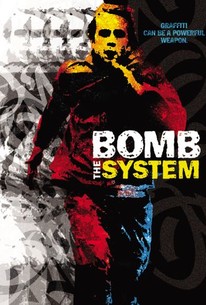 Critics Consensus: Given the movie's premise, one would assume it's gritty and street-smart, but in reality it's a slave to stale cliches and formula.

Critics Consensus: Given the movie's premise, one would assume it's gritty and street-smart, but in reality it's a slave to stale cliches and formula.

Critic Consensus: Given the movie's premise, one would assume it's gritty and street-smart, but in reality it's a slave to stale cliches and formula.

A young man with a troubled past expresses himself through street art in this independent drama. Anthony (Mark Webber) is a 19-year-old kid living in New York City who was introduced to "bombing" -- graffiti art sprayed on public walls when the cops aren't looking -- by his older brother. When his brother died, Anthony took up bombing himself, and with the help of his pals Justin (Gano Grills) and Kevin (Jade Yorker) he does murals under the street name "Blest," while struggling to avoid the NYPD's anti-graffiti Vandal Squad. Anthony's mother (Donna Mitchell) is after him to quit bombing and attend art school, while his girlfriend (Jaclyn DeSantis) wants to get out of New York, and would like him to join her. However, it takes a run-in with Bobby Cox (Al Sapienza), a Vandal Squad cop with a hair-trigger temper, to push Anthony into making a decision about his life. Bomb the System was the first feature film from writer and director Adam Bhala Lough, who was only 23 years old when the picture was made.

Lee Quinones
as Himself

Muck
as Hazar's Girlfriend No. 1

Trina Grant
as Hazar's Girlfriend No. 2

Critic Reviews for Bomb the System

Thoroughly fails to convince that its handful of New York characters known as 'bombers,' graffiti mongers futilely yearning for immortality via nightly despoiling of public and private property, is of any tragic interest.

Notable mainly for its hallucinatory, tripped visuals, which go a long way toward compensating for a less-than-riveting narrative.

A richly textured drama with an angry poetic edge that gets inside the obsessive subculture of New York graffiti artists.

A didactic ode to a lifestyle that makes little sense, no matter the darkly romantic rebel-with-a-cause ideas associated with what is essentially an act of vandalism.

Preachy and single-minded, populated by a world of sympathetic heroes and hissable villains.

The story is so loosely developed and devoid of suspense, it barely seems to exist.

I came out of this wishing the paint can crowd would settle for tattoos.

The film half-heartedly paints their actions as rebel-chic heroism even when it has all the integrity of tomcats spraying outside their yards...

In the end it's all seductive surface and no substance, but Lough has a bold eye and a vivid sense of uniquely urban beauty.

A flashy but numbingly hollow compendium of Trainspotting-inspired visual gimmicks, Lough's tale of New York City 'bombers' is formulaic in the extreme.

This fictional take on the subject mostly avoids bombing in the bad-movie sense, but could stand to calm down a little.

Audience Reviews for Bomb the System

There are no featured audience reviews yet. Click the link below to see what others say about Bomb the System!