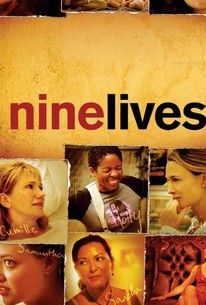 Critics Consensus: Nine Lives is bolstered by a strong cast and features many insightful glimpses into the lives of women.

Critics Consensus: Nine Lives is bolstered by a strong cast and features many insightful glimpses into the lives of women.

Critic Consensus: Nine Lives is bolstered by a strong cast and features many insightful glimpses into the lives of women.

Filmmaker Rodrigo García takes an unusual look into the lives of nine different women in this episodic drama. Each of the film's nine sequences has been staged as a single shot, using the Steadicam system to allow the camera to follow the action fluidly and without cuts. In these short episodes (lasting between ten and 14 minutes), Holly (Lisa Gay Hamilton) has a brief moment of reverie while confronting the specters of her past in her old neighborhood. Maggie (Glenn Close) escorts her young daughter Maria (Dakota Fanning) to a cemetery as they visit the graves of their family members. Ruth (Sissy Spacek) is a married woman contemplating an affair while visiting Henry (Aidan Quinn) in his hotel room. Diana (Robin Wright Penn) unexpectedly runs into an old boyfriend, Damian (Jason Isaacs), while shopping for groceries. Camilla (Kathy Baker) is a hospital patient awaiting surgery for cancer. Samantha (Amanda Seyfried) is a teenage girl who helps look after her handicapped father Larry (Ian McShane). Sandra (Elpidia Carrillo) is a female prison inmate who is expecting a visit from her children. Sonia (Holly Hunter) lashes out at her boyfriend Martin (Stephen Dillane) when she finds out he's been cheating on her. And Lorna (Amy Brenneman) has an unexpectedly moving encounter with her ex-husband Andrew (William Fichtner) as she pays her respects to his second wife, who has just passed away. Nine Lives premiered at the 2005 Sundance Film Festival.

Amy Lippens
as Nurse
View All

Each woman has to turn herself inside out in continuous time. It has the demands of theatre and the intimacy of cinema.

The stories are sketches, often without resolution, and while individual segments succeed admirably, taken together the portraits are a fitful match.

Certain characters and their particular pains become so engrossing in their 10-minute bits that it's sad to see them go.

It's unclear why Garcia continues to choose to limit himself to these diluted portraits, rather than the layered and textured worlds that his writing and directing hint at.

If only every women's movie had Nine Lives' fire, intelligence, and conviction, they wouldn't have such a shaky reputation in the first place.

But when a piece works, like Penn's, Garcia's film soars, the over-theatricality of the artifice forgotten amidst the brilliance showcased by the actors onscreen.

Loss is the common thread that binds the women in these nine snapshots that involve us in their intricate lives. Some stories work beautifully, while others are dull and hardly capture our interest

In the end, all of the pieces in Nine Lives fit together perfectly. If one story doesn't quite resonate for you, the next one likely will in this small but beautiful film.

Kathy Baker deserves and Oscar nomination for juggling so many different feelings during her slow, reluctant acquiescence to the drugs that may likely save her life.

A quiet, reflective film that finds drama in the kind of moments that make up real life.

Nine Lives had me tense, engaged, sometimes disgusted, sometimes moved, and always interested. Garcia is an ingenious and eloquent storyteller.

Let's gather the best possible talent we can and then put them in the most aimless, depressing situations that have no resolution that we can. UGH! Would be one star if not for the talent involved.

The concept is not original at all, that's probably why it has such a low average. If you've seen Crash and Magnolia and you liked it, than I don't see why you wouldn't like this one. Some good solid acting and 'drama for your mama'.

Couldn't keep my attention very well. Although, like most movies filmed this way... I like to watch how the stories intertwine.

i'm a huge, huge fan of multiple storyline, vignette movies, and some of them have been executed really well - crash, paris je t'aime, amores perros (or anything alejandro gonzalez inarritu, to tell you the truth.). and so it's not that i don't like this style of moviemaking. it's just that this particular film's ideas were so half-baked, so underdeveloped, so cliche. i mean, the one story with the deaf guy and lorna was perhaps the only original one that truly captured me. some were well-acted but the story was very very poor. and the so-called "connections" are a joke. it's like...geographical proximity is the only thing they have in common. i like to have a parallel drawn between the stories, not some, "oh! i vaguely recognize this character. oh yes, i remember, from the last story! yay!" i mean, i get it, it's about 9 women's lives and their difficulties dealing with loss or love or whatever. it wasn't a bad idea for a movie and garcia did admirably under the circumstances but he really should've thought this through more.