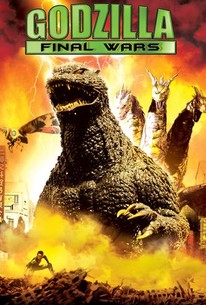 Giant monsters are rampaging in cities across the globe, and as the Earth Defense Force struggles to find a way to defeat the malicious mutants, their only hope lies frozen in the Antarctic in Versus director Ryuhei Kitamura futuristic entry into the long-running kaiju series. In the near future, Earth is being decimated by monsters that have been mysteriously unleashed in every major city from New York to Sydney, and as the world population falls into a paralyzing state of panic, the Earth Defense Force must stage a daring initiative to save the human race. After a giant unidentified flying object suddenly appears and vaporizes the beasts in a matter of seconds, the relieved citizens of Earth are comforted to hear that the newly arrived alien race is seeking to make a peace treaty with humankind. All is not as it seems, however, and as the nefarious aliens reveal their true nature, it's up to Godzilla to take back the planet -- or die trying.

Kazuki Kitamura
as The Controller of Planet X

Don Frye
as Douglas Gordon, Captain of the Goten

Masatô Ibu
as The Xilian General

Koh Takasugi
as Captain of the Karyu

Shosuke Tanihara
as Man On Sofa

This 28th entry in Toho Studio's series about the fire-breathing big fella is campily engaging for a while, but at two hours-plus you may come out feeling captivated dead.

It's clear that director Ryuhei Kitamura approached the material with the sole intention of creating the mother of all monster rumbles.

Some kind of unholy hybrid of Godzilla, The Matrix, and Star Wars.

...the story is about on par with the Xbox games. But who cares? It's pure camp.

This final film offers a lot of sound and fury and weaves fourteen copyright Toho monsters into one plot, but the film offers nothing that is both new and of interest. The plot is a re-tread of that of DESTROY ALL MONSTERS.

...it becomes clear almost immediately that Kitamura is absolutely the wrong choice for the material...

... a blithely campy, altogether good-natured love letter to the classic Godzilla films of the 1960s and 1970s directed by... Japan's adolescent action stylist.

The result is a gonzo love-letter from Kitamura to the Showa Era, blending a Matrix/X-Men-inspired superhero story for the human cast with a Destroy All Monsters-inspired alien-invasion story.

If this truly is his last outing, at least he's going out with a massive bang.

Fifth years of Godzilla has totalled 28 movies of mixed to great quality in terms of monster action, thrills, horror and exhilarating fights that are larger than life. With this entry being the 28th film in the series, one must ask yourself is this a great film to celebrate fifty years of the legendary Godzilla? Well, kind of. The film tends to have a decent idea for its story, however at times it just lacks in terms of effective material that will satisfy fans. That's normal because after nearly thirty movies, how far can you carry on a series? Even monster films like this lack steam. As a whole, it is a decent affair, but one that certainly could have been done much better and it does leave a lot to be desired in terms of a good story and action. The cast do what they can with lacking material, but it ends being an amusing little monster film that is decent for what it is, but at the same time could have been better because of the fact this was fifty years of Godzilla. The film has its merits and entertaining, but at the same time, you wonder how good this one could have been if there would have been a bit more thought out elements to its plot. As a Godzilla film it works, but compared to the last few outings, it's a step down in quality. Worth seeing if you loved the other entries, but don't expect anything great. Go in with decent expectations, and that's what you'll get. Godzilla: Final Wars is fun decent significant flaws.

I admit I haven't seen any of the old Godzilla films from Japan and never really been into them but the poster for this film just intrigued me, it looked like a computer game cover which I wanted to play. Dunno how they do it but somehow Japanese films always seem to look gloriously slick n glossy and at the same time completely insane and over the top whilst also managing to be really good. This is no exception with a mix of the traditional hammy looking 'men in suits' approach which all Zilla fans will know and love, combined with some bluescreen work, cgi and model work. It sounds like a real cocktail and it is with some truly silly camera angles and in your face effects and stunts which wouldn't look outta place in tacky W.S. Anderson film being accomplished by Milla Jovovich but somehow the Japanese make it all look terrific, colourful, stylish and original, just like their computer games. All the monsters are included in this Zilla epic, a real monster mash just like the old Universal horrors, plus there are cast members from various older Zilla pics also (apparently) which is great for fans. The film is a blend of many genres and ideas you could pick from lots of films, its such an outrageous ambitious looking project but clearly made with care for the franchise. The film is a fans wet dream and for newbies like me its a great sci-fi monster rumble with plenty of great visuals and neat ideas. The characters are all a bit cliched but you kinda know that going in, still they all look good, kudos to Don Frye who looks great in his 'M. Bison' looking outfit, sounds daft I know but he really looks cool. Despite not being a graphic novel or comicbook adaptation this film really does feel and look like one, I really can't give enough praise for the tasty visuals, its so pleasing to eye especially with the mix of effects on offer. Completely enjoyable for all we no knowledge of previous films required :)

Godzilla's 50th anniversary and it is a birthday blowout. The plot is pretty much a remake of "Destroy All Monsters", in which many monsters make an appearance. Not all of Toho's monsters appear, but it is a ton of them. Gigan makes an appearance, his first appearance since the Showa series. Even obscure monsters like Ebirah and King Cesar are in this movie. The film is literally non-stop action from beginning to end. Not only do the monsters fight, but the human scenes are laden with gravity-defining kung-fu fighting. It is a nice trade-in because the usual formula is monsters fighting and people talking. Here it is all fighting. The action sequences are kinetic and also varied, so it never becomes repetitive. The sci-fi look of the film makes me feel like I'm watching a live-action anime at times. Don Frye gives the film a memorable human character because he is tough and holds his own in fight scenes. If Michael Bay were to make a Godzilla flick, this is probably what it would be like. Final Wars is crazy but insanely fun.

Godzilla is by far my favorite movie monster, and to me, this is the best out of all of the films he has been in. For the 50th anniversary, Toho definitely went all out with this movie having nearly every monster Godzilla has fought. Though I did wish that there were a few other monsters such as Orga, Biollante, Space Godzilla, or Mecha-Godzilla (which I was shocked he at least wasn't in it.) But I'm happy they included my favorite monster villain Gigan, since he hadn't been in a monster movie in over 40 years prior to this film. And we had probably the best fighting scenes ever in a monster movie, but its not just the monsters fighting, its also humans and aliens fighting as well, and each of the fights are all very well choreographed and done, and thats saying a lot for a movie where dudes dress up in rubber monster outfits that are boiling hot inside and they couldn't see out of them. Also the musical score for this film is fantastic, and it definitely suits the situations around them. Though the cg in this film, though very little, isn't all that impressive, it still does its job at telling a legitimate story, and the spaceships attacking the Otango ship is pretty cool to watch, and reminds me of something out of Star Wars.