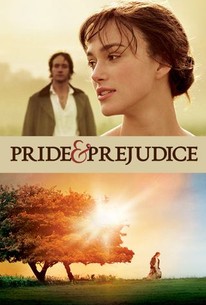 Critics Consensus: Sure, it's another adaptation of cinema's fave Jane Austen novel, but key performances and a modern filmmaking sensibility make this familiar period piece fresh and enjoyable.

Critics Consensus: Sure, it's another adaptation of cinema's fave Jane Austen novel, but key performances and a modern filmmaking sensibility make this familiar period piece fresh and enjoyable.

Critic Consensus: Sure, it's another adaptation of cinema's fave Jane Austen novel, but key performances and a modern filmmaking sensibility make this familiar period piece fresh and enjoyable.

Jane Austen's perennially popular story of the game of love among the British upper classes returns to the screen in this polished film adaptation. The Bennets (Brenda Blethyn and Donald Sutherland) are the parents of five daughters near the close of the 18th century. Comfortable within their means but well short of rich, Mr. and Mrs. Bennet are looking for suitable husbands for their girls, and they are encouraged to learn that an eligible young bachelor from a wealthy family, Charles Bingley (Simon Woods), has moved into a nearby estate. Eager to see if a match can be made, the Bennets bring their daughters Elizabeth (Keira Knightley) and Jane (Rosamund Pike) to a ball thrown by their new neighbor to see if sparks will fly. Jane seems to like Charles, and he appears to feel the same, but Elizabeth takes an immediate dislike to Darcy (Matthew MacFadyen), Charles' egocentric best friend. While Elizabeth is infatuated with military man Lt. Wickham (Rupert Friend) and finds herself courted by William Collins (Tom Hollander), a well-meaning but drab man of the cloth, fate causes Elizabeth and Darcy to frequently cross paths, and while they don't care for one another, they can't stop thinking about each other, either. Pride & Prejudice also stars Jena Malone, Judi Dench, and Penelope Wilton. ~ Mark Deming, Rovi

News & Interviews for Pride and Prejudice

View All Pride and Prejudice News

Critic Reviews for Pride and Prejudice

The big-screen version of Pride & Prejudice doesn't disappoint and may even reach a few young people who normally might not be attracted to a period piece.

oe Wright should be applauded for delivering a vividly realised Austen adap -- one which confirms Knightley has graduated from the Jackie Bisset of the '00s to this decade's Julie Christie.

Breathes new life into characters and conversations never before quite wholly free from the printed page.

It's a fitfully engaging romance, it's just not Pride and Prejudice.

Keira's cat-smile suggests such supernal all-knowingness that, with Austen's adapted dialogue (via Deborah Moggach) tripping off her tongue, she comes off as an eighteenth-century Maureen Dowd.

This fresh adaptation shakes the dust off Jane Austen's early 19th-century novel of manners and gives it a good airing out.

Knightley makes for a spunky Lizzie but it's MacFayden's natural glumness that actually makes him quite the perfect Darcy.

Although it might leave one wanting in regards to the complicated feelings of love, Joe Wright's film is worth the look. [Full Review in Spanish]

Wright adapts the story to the rhythm of a dance, makes the dialogue not seem look like ancient prose and illuminates not with technical artifice, but with the beauty and freshness of Keira Knightley's Elizabeth. [Full Review in Spanish]

A sumptuous, condensed and very well-interpreted version of the English classic. [Full Review in Spanish]

Audience Reviews for Pride and Prejudice

With a great cast, a wonderful score and a sumptuous production design that feels like a travel in time, this is a delightful adaptation that benefits mostly from Austen's dialogue (despite not being as charming as when you read it) and Keira Knightley's strong performance.

Decent, but really not my type of movie. I would totally hate to live in that era, I can't believe women go all silly over it. I just felt cross the whole time watching the women married off and treated like cattle. Not my idea of a romantic film! As to the cast, the highlight here is Keira. She is fantastic as Lizzie. The actor playing Darcy, I agree with a previous reviewer - he looks constipated. Carey Milligan doesn't have a lot to do here but giggle. Jenna Malone I couldn't even recognize. The parents I found tiresome. The movie itself looks great and there are some nice shots here. I am very mixed on this movie. I didn't like the message a whole lot - particularly the 15 year old sister. However, I realize different times. At least Lizzie was a little older and spirited. I guess I am still thinking about it a day later, so it must work in some level...

This film really took me by surprise, not by how good it was, but by how much I liked it. This excellent film completely took me in and I absolutely loved it.

There's really not much to say about this one. The story is great, and brilliantly adapted from the famous Jane Austen novel. The cinematography is excellent, as are the props, costumes, etc...you are truly transported into the era. The music is good; the writing is good; the cast is good...everything about this film is good.

Special mention must go to Keira Knightley Oscar nominated performance. It really was that good! She's an actress that I highly respect and enjoy despite the skeptics that accuse her of not being that great of an actress. But her performance here is proof of her talents. I loved her in this film!

Pride & Prejudice is an excellent film! A must see!

A very good movie. I will get ridiculed by my friends but this was well worth the time i spent watching it