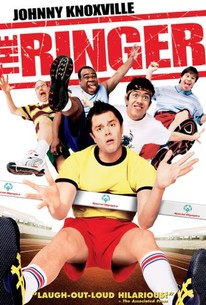 Critics Consensus: Despite a few laughs and good intentions, The Ringer is too predictable to really score the points it aims for.

Critics Consensus: Despite a few laughs and good intentions, The Ringer is too predictable to really score the points it aims for.

Critic Consensus: Despite a few laughs and good intentions, The Ringer is too predictable to really score the points it aims for.

A guy trying to do the right thing ends up taking part in one of the most morally dubious con games in history in this comedy. Steve Barker (Johnny Knoxville) is an office drone who wants to move up the corporate ladder, but when he asks his boss for a promotion, it comes with a condition -- Steve has to fire Stavi (Luis Avalos), who has been the firm's janitor for years. Steve decides to soften the blow by hiring Stavi to do his lawn and garden work. However, an accident robs Stavi of several of his fingers, and since he doesn't have medical insurance, Steve needs to find a way to pay for his surgery. Steve's uncle Gary (Brian Cox), a sleazy type who will bet on anything, also needs some fast cash, and comes up with a get-rich-quick scheme -- Steve was a track star in high school, and with the Special Olympics Championships coming up, all Steve has to do is pretend to be mentally challenged, enter the competition, and win the running events against six-time medalist Jimmy (Leonard Flowers). Gary will bet big on Steve, and the odds will allow them to clean up. Steve is appalled by the idea, but he needs the money badly enough to go along. However, Steve discovers that Jimmy is fast enough that he has little chance of beating him. However, Jimmy's colossal ego has made him many enemies among his fellow Special Olympians, and they're eager enough to see him taken down a peg that they help Steve train for the big event. Matters become all the more complicated when Steve becomes infatuated with Lynn (Katherine Heigl), a beautiful woman who has volunteered to help the challenged athletes, and would doubtless be furious if she found out what Steve was really doing. Produced by Peter Farrelly and Bobby Farrelly, The Ringer was the first fiction directorial credit for Barry W. Blaustein; the story also parallels a 2004 episode of the animated television series South Park, "Up the Down Steroid." ~ Mark Deming, Rovi

Steve Levy
as Himself

Diana Heart
as Girl in Wheelchair

Heidi B. Bush
as Heidi

Bryan Dilbeck
as Himself

Carlos Sierra
as Himself

Critic Reviews for The Ringer

The Ringer, for all its glaring flaws, pulls the rug out from under us.

It's just so predictable.

An uncomfortable intermingling of message movie and gross-out comedy, a sporadically funny vehicle that indicts its audience for laughing. Come on, guys. You can't have your fun and eat it too.

The worthwhile bits are few and far between. In the rush to avoid exploiting the athletes, the filmmakers have stuck it to the audience instead. Not funny.

Predictable and unconvincing as romantic comedy, the movie is surprisingly sweet and funny whenever Steve is hanging out with his fellow Special Olympics players.

As in the best Special Olympics events, everyone finds a way to win.

Knoxville himself, whom I've trashed on more than one occasion, is remarkably entertaining here in a role that is both physically and mentally demanding.

Hits all the right notes in comedy, light down to Earth drama, and a resulting tasteful comedy that's worth watching.

A good-natured comedy that isn't particularly interesting or, for that matter, very funny.

...a whole lot better than one might've expected.

It's a bold idea, taking mental handicap as a backdrop for a story about a man's growing up, but this film chickens out as soon as it begins. Nothing is real, nothing is at risk.

Audience Reviews for The Ringer

Comical, but disjointed, The Ringer fails at being an effective comedy that has any real merit. I don't personally think that this film makes fun of disabled people, and I didn't take offence (I have Cerebral Palsy), I simply think that the film given the subject matter could have been much better than what it turned out to be. The film was comical at times, but it lacked anything to really make this comedy stand out. I thought it was nice to see Johnny Knoxville in a comedy other than Jackass, unfortunately, this is not a great comedy, and he is capable of so much better. This film is poorly constructed with tiresome gags that are just not funny. The film had potential in being something better than this, but it failed miserably. This is an awful film with no redeeming qualities, and given a script rewrite, this film could have been good. The jokes don't work most of the time, and though the film has a good intention, it doesn't do anything with the material. The film suffers from its predictability, and therefore by the films end, you really don't care about the characters. This film, like I said could have been good, but with a poor, predictable script, it never succeeds, and it becomes awful by the minute. The Ringer just ends up being a missed opportunity in trying to create a good comedy. The film could have much better than this.

Johnny Knoxville playing mentally challenged shouldn't be too much of a stretch for him. What with all the braincells he must have lost during his years in Jackass, he's practically in the special olympics already. Anyways, before this becomes too much of a thesis on Johnny's IQ (or rather to say, lack thereof), let me just mention what I thought of the actual movie. First and foremost, I was surprised in a very positive way in how it deals with the whole concept. Contrary to what you may believe, it doesn't make fun of its special participants, but rather celebrates their great personalities, while giving them a chance to shine on the big screen. Furthermore, it makes a very important statement about how society - out of the worst kind of ignorance - underestimates these individuals and what they're actually capable of. Besides said message, it's also a highly entertaining story with its heart in the right place. I was laughing out loud on more than a few occations - never once feeling the urge to look at the watch. One of my favourite gags is when Johhny (a.k.a. Steve Barker) watch a bunch of movies with his uncle for "research", and between a copy of Rain Man and Forrest Gump, you also see a video marked "Best of Chevy Chase". Now, I don't know about the rest of you, but that sure counts for funny in my book.