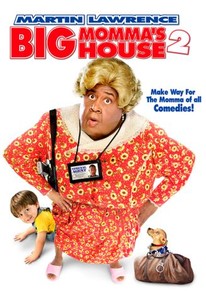 Critics Consensus: Unfunny and unoriginal. In other words, a perfect piece of evidence for opponents of pointless movie sequels.

Critics Consensus: Unfunny and unoriginal. In other words, a perfect piece of evidence for opponents of pointless movie sequels.

Critic Consensus: Unfunny and unoriginal. In other words, a perfect piece of evidence for opponents of pointless movie sequels.

An FBI agent finds himself crossing the gender line again in the name of national security in this sequel to the comedy hit Big Momma's House. Tom Fuller (Mark Moses) is a computer whiz who is under investigation by the FBI, who suspect he may be the man behind a dangerous piece of underground software that would allow terrorists and criminals to access secured intelligence files online. The Bureau is looking for a way to get inside Fuller's home to find out what he's doing when a golden opportunity presents itself -- Fuller and his wife, Leah (Emily Procter), are in the market for a nanny to help look after their three children. The FBI sends in Malcolm Turner (Martin Lawrence), who will once again impersonate feisty septuagenarian Hattie Mae Pierce, better known as "Big Momma." Big Momma gets the job, but while trying to dig up the truth about Fuller's possible criminal connections, Malcolm also finds himself developing a close relationship with the suspect's wife and kids. Malcolm also finds himself offering unlikely romantic advice to his new partner, Kevin (Zachary Levi), and developing a new appreciation of the day-to-day travails of his wife, Sherrie (Nia Long).

Preston and Trevor Shores
as Andrew

This is funny mostly for its brazen disregard of common sense -- specifically, the idea that elaborate full-body prosthetic makeup could be slapped on in seconds by a cop on the run.

It's mildly, amiably funny, in a juvenile way.

If Lawrence makes you laugh, you'd be better off watching him do stand-up.

The least necessary sequel this side of Deuce Bigalow: European Gigolo.

It's really just a ploy for some more flaccid fat-suit antics that are as short of inspiration as Big Momma is of breath.

What remains is leaden, predictable action and an uneasy mix of family-friendly antics and distinctly adult humour.

Essentially a series of skits designed to show Big Momma in a variety of "funny" scenarios.

It's thin, but enough to make you forget the cold for 90 minutes.

A truly insipid affair that makes the first film seem like classic comedy.

Robin Williams, to his eternal credit, never came up with a Mrs. Doubtfire sequel.

Not as funny as the first one, but still had it's occasional laughs.

wow the second one wasnt a disappointment!! It still had its laughs and they were also continous throughout the movie!! again its a good family movie and worth a watch!

The second instalment in the Big Momma franchise is extremely weak when compared to the original, now they are just getting desperate and cannot go anywhere else in this series! The freshness of these films was weak to start, but now it's just flushing away! Big Momma's House 2 does have it's comedy and moments of enjoyment, but nothing else!