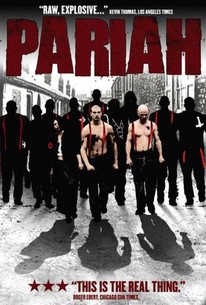 Randolph Kret wrote and directed this subculture drama exploring skinhead gangs. The gang-rape of Sam (Elexa Williams) triggers her suicide. Her boyfriend Steve (Damon Jones) finds the legal system inadequate, so he plots revenge by infiltrating the gang. To gain entrance, however, he must embrace the very attitudes he despises. Once inside, he gains a better understanding of the factors behind the neo-Nazi movement, but eventually he's put on the spot and must choose between committing murder or revealing his cover. The Scott Grusin score includes songs by Minor Threat. Shown at the 1998 Slamdance Film Festival.

The film maintains a convincing realism: It's acted out by little-known but expert talents and shot, cleverly, as though the camera were a fly on the wall.

[T]his [...] film by Randolph Kret mistakes the study of a particularly virulent set of symptoms for a diagnosis... Nuance is not something Mr. Kret has much use for.

[I]n no time flat you get a clear idea of how broadly painted and platitudinous Randolph Kret's Pariah is [...] If only being right were all you needed.

For all its chutzpah and idealism, Pariah remains a muddled mess, a far cry from Australian director Geoffrey Wright's seminal Romper Stomper, which this film clearly strives to emulate...

Pariah, a raw and unblinking look at the skinhead subculture, is a movie I'd like to show to those admirers of Fight Club who have assured me of their movie's greatness. This is the real thing...

There's no doubting the ability of [director Randolph] Kret [...] in working up an audience and drawing persuasive performances from a sizable cast.

Take a tip from the title: Shun this well-meaning but ridiculous revenge drama about a vicious gang of bone-headed, California neo-Nazis and the man hell-bent on destroying them.

There are plenty jolting episodes of rage and violence, but in the end this pulpy potboiler is wrapped up in an unsatisfyingly tidy, coincidence-heavy bow.

Pariah is [...] a brave, in-your-face attempt to handle a very tough, highly unattractive subject. The result is a commendable, if unpleasant, near miss.

Randolph Kret's movie is thrown together helter-skelter, scenes popping up before our eyes without rhyme or reason, but the picture is so visceral, has no much damn frenetic energy, that it compels our attention.

does a lot with a little, but it's still not much

Whoo Wee is this here a stinker for the ages. It's similar if someone was to order a turkey and turd sandwich, and then ask for them to hold the turkey, and could you have more turd in it's place? I rented this because Ebert gave it a positive review, but looking back on it I think he hated Fight Club more than he liked Pariah. Awful dialogue, characters acting without motivation, sometimes in direct opposition in how they would react in anything resembling reality, and the weird sensation that the writer has never actually met anyone in his life. Black people approach women to harass them and then punch them in the face, parties are crashed by skinheads with no attempt to call police, not out of cowardice, but more politeness and the characters act like they're in a high school play. The plot synopsis below is astounding, how anyone could notice subtleties of our lead vigilante noticing or emphasizing with anyone is beyond me. He mopes, yells and stands silently, all very poorly. I had no idea what was going on in any of the characters minds at all. Let me just say this here is a stinkeroo and best avoided.