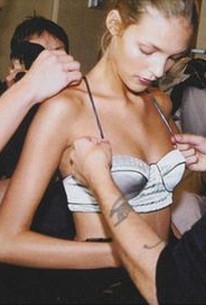 The hard facts behind the glamour of the fashion industry go under the microscope in this documentary from filmmaker and photographer Douglas Keeve. Vogue Magazine and the Council of Fashion Designers of America have created an annual competition to discover and recognize important new talent in clothing design, and Keeve offers a look at three of the contest's ten finalists. Do-Ri Chung is an immigrant who quietly crafts upscale dresses in a small space beneath her parent's New Jersey dry cleaning shop -- her mother helps with the sewing, father ships out the merchandise, and Chung's beau helps with local deliveries. Lazaro Hernandez and Jack McCullough are two 26-year-old designers who work as a team; they've already managed to sell some pieces to a number of exclusive shops and have moved a handful of alligator ski jackets at a mere 29,000 dollars each, though they're still barely breaking even. And Alexandre Plokhov's work has attracted the eye of celebrity fashion maven Sarah Jessica Parker, though he still can't afford furniture for his apartment. Seamless also features cameo appearances from Vera Wang and Isaac Mizrahi, the latter of whom was the focus of an earlier Keeve documentary, Unzipped.

You may find that Vogue editor-in-chief Anna Wintour is easier on the eyes than are any of the designs, and certainly much more interesting than the novels she's been stuck in.

Given the material, Seamless can't be faulted a certain star-struck superficiality. With a hip-hugging running time of 75 minutes, however, neither should it feel padded.

Seamless is pretty dry stuff that verges on an infomercial, despite cameo appearances by Sarah Jessica Parker and Mizrahi himself.

Fashion is something you either get or you don't, and whether you'll want to lay down $10 for Douglas Keeve's insider documentary depends entirely on whether you'd spend your last few bucks on the new issue of Vogue.

Though the film is a sober account, the subject alone ensures numerous moments of inspired hilarity.

A thoughtfully shot, intelligent look at this competition's progress.

There are no featured audience reviews yet. Click the link below to see what others say about Seamless!