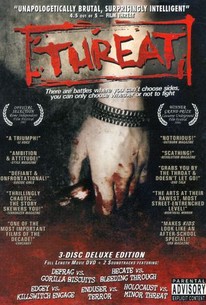 When a non-racially motivated misunderstanding between a white, straight-edge punk and a black hip-hop revolutionary turns violent, the resulting confrontation ignites a powder-keg of pent up racial anger in director Matt Pizzolo's gritty street drama. Despite his violent past, white straight-edge street punk Jim is doing his best to gain control of his unpredictable anger. Meanwhile, single black father Fred is doing his best to raise his son despite the ever-deepening feeling that the odds are stacked against him. Though on the surface the pair wouldn't seem to have much in common, a mutual love of comic books finds Jim and Fred realizing that they may not be so different after all. Crushed by the loss of their good friend to an auto accident involving a drunk driver, Jim's straight-edge friends form a gang called One Less Drunk with the intent on preventing drunk drivers from stepping behind the wheel. After a confrontation between the leader of One Less Drunk and a close friend of Fred's is mistakenly interpreted as being racially motivated, the simmering racial tensions quickly explode into a full-scale racial riot. As Jim and Fred struggle to make sense of the chaos that is sweeping the city, a 16-year-old HIV-positive girl named Mekky is consumed by her fascination with sex and death and a young poet named Kat considers turning the tables on her obsessive stalker.

Even when violence erupts, there is no explanation, no logic, and no reckoning.

There are no featured audience reviews yet. Click the link below to see what others say about Threat!