The Panic in Needle Park1971 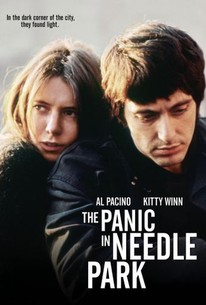 The Panic in Needle Park Photos

A couple loves heroin as much as they love each other in Jerry Schatzberg's grim drug drama. After an illegal abortion at the behest of her faithless lover (Raul Julia), lost innocent Helen (Kitty Winn) finds solace with small-time crook Bobby (Al Pacino), a regular in Manhattan's "Needle Park." As Bobby shows her around his Upper West Side world, the two become inseparable. When Helen realizes that Bobby is a full-blown junkie, she joins him in addiction, and their downward spiral begins in earnest. Weathering overdoses, prostitution, betrayals, and a "panic" after a major bust, the pair manages to stick together, the habit sealing their fate. ~ Lucia Bozzola, Rovi

News & Interviews for The Panic in Needle Park

View All The Panic in Needle Park News

Critic Reviews for The Panic in Needle Park

The Panic in the Needle Park rolls up the drug culture's sleeve and picks at the scabs underneath.

A gruelling but highly responsible film about the influence of heroin on a New York street romance.

It is not filled with quick cutting or gimmicky editing, but Jerry Schatzberg's direction is so confident that we cover the ground effortlessly.

Though Winn and Pacino give buoyant performances, I think the film often nearly falls into afterschool special territory.

Despite its moderate concessions to a tidier commercial narrative line than the book afforded, The Panic in Needle Park remains pretty uncompromising.

While it sometimes seems to be spinning its wheels in 70's-era miserablism, it's hard to take your eyes of the central performances, and the truly alarming descent into the ugliness of addiction at its core.

Drug abuse movies can be hard to take, but this compelling drama has a superior screenplay and sensational performances from young Al Pacino and Kitty Winn.

Bleak and downbeat, this remains a more effective anti-drug PSA than any of Nancy Reagan's "Just Say No" finger-wagging.

Made its mark during its day, but has become outdated.

An occasion to meditate upon the frightfulness of heroin addiction and why many youth opt for the euphoria of white powder rather than the promises of the American dream.

More a character study than any kind of narrative story, it's moderately worthwhile but far from a classic.

Audience Reviews for The Panic in Needle Park

A stark drug addiction tale, dignified child of the early seventies, when explorations of social, economical and political taboos were brutally honest. Back then newcomers, Al Pacino and Kitty Winn pour their souls as a couple of heroin addicts struggling to survive their habit. aesthetically the statement is as grim as life itself: hope is brief, there's no music, nor full closure, it goes on and on, and gets harder each time.

I loved this movie from start to finish. I could have watched it for hours. I loved the style that Schatzberg uses and it is one of the more realistic drug films I have seen. Al Pacino is phenomenal and it was cool to see a very young Raul Julia and Paul Sorvino. A depressing gem with an amazing ending.

There isn't much going on in this movie it seems, or maybe it's just me? Sure there's a love story, and it has it's ups and downs like all love stories, and yes it's interesting to see what life was like for these people in needle park, but there isn't an end to the movie, and I didn't like that.

Yet another great early film from starring Pacino, a story of love and the escalation to drug addiction. This film would be just as relevant in today's time as it was back then. Al Pacino's attraction for the controversial in the early days was truly admirable.

The Panic in Needle Park Quotes