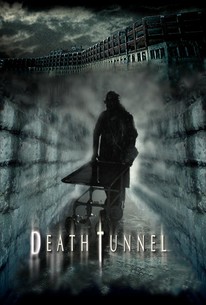 When an initiation ceremony goes awry and five college girls become stranded in a haunted sanatorium with a wicked past, they struggle to uncover the dark secrets that lie within and make it out alive in filmmaker Philip Adrian Booth's dark tale of supernatural terror. Deep within the darkened halls of a massive Kentucky sanatorium built in 1910, 63,000 lives were lost to the mysterious "White Plague." Now, decades after the historic tragedy, the abandoned sanatorium remains haunted by five lost souls whose spirits can't find rest in the natural world. As the terrified girls fall one by one to the vengeful specters, the discovery of a massive, 500-foot underground tunnel used to dispose of the bodies may provide the only escape from a world where the cold hand of death maintains a frightful grip on the pulse of the living.

Gary Wolf
as Gio
View All

Devoid of all structure, pacing, and narrative sense, Death Tunnel is a film that almost feels surreal in its badness.

...completely devoid of anything even resembling ambiance or tension...

With scary and disturbing imagery throughout the whole thing...this horror movie was pretty good. I thought that the location of it was very scary and creepy...It is even said to be based on true events about a haunted hospital from the 50's.

someone told me to watch this....waste of time

Fun to laugh at, but they were totally trying to be serious and they know it.