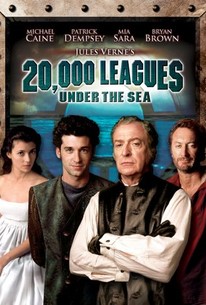 When an unidentified sea creature begins terrorizing a New England fishing harbor, it's up to an innovative marine biologist and a steely nerved sailor to uncover the true origins of their underwater tormentor in director Ron Hardy's tense tale of terror in the water. The year is 1886, and as a number of fishing vessels go missing at sea, rumors of a formidable, ocean-dwelling beast quickly begin to circulate among the frightened fishermen. Despite the compelling evidence that something sinister is lurking beneath the serene waters of the sea, Professor Pierre Aronnax (Patrick Dempsey) and salty sailor Ned Land (Bryan Brown) are reluctant to believe the fear-frenzied rumors of the frightened townspeople. As their investigation into the strange series of events leads them to the reclusive and obsessive Captain Nemo (Michael Caine), Aronnax and Land soon discover that there may be more to the rumors than they had previously suspected.

Boe Kaan
as Ivanda
View All

Hardy seems to be going out of his way to prove that straying from the story will ruin you.

There are no featured audience reviews yet. Click the link below to see what others say about 20,000 Leagues Under the Sea!