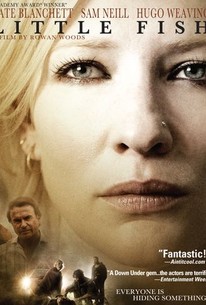 Critics Consensus: Fueled by powerful work from a strong cast led by Cate Blanchett, Little Fish is a hard-hitting story worth watching -- and a major step forward for director Rowan Woods.

Critics Consensus: Fueled by powerful work from a strong cast led by Cate Blanchett, Little Fish is a hard-hitting story worth watching -- and a major step forward for director Rowan Woods.

Critic Consensus: Fueled by powerful work from a strong cast led by Cate Blanchett, Little Fish is a hard-hitting story worth watching -- and a major step forward for director Rowan Woods.

A former drug-addict in her early thirties attempts to put her shady past to rest while paving the way for a brighter future in director Rowan Woods' tale of love, trust, and redemption in modern-day Australia. Tracy Heart (Cate Blanchett) hasn't lived her 32 years so much as she has simply survived them. Ravaged by the drug-addiction and determined to redeem herself in the eyes of her overworked single-mother Janelle (Noni Hazelhurst), Tracy makes a personal vow to open her own business and turn her life around before it's too late and life has passed her by. Tracy's plan is complicated, however, when three men from her past reappear with their own plans for the future. In addition to the troubling re-appearance of her ex-boyfriend Jonny (Dustin Nguyen), her criminal-minded brother Ray (Martin Henderson) seems hell-bent on making a name for himself in the underworld, and the emotional demands of troubled family friend and ex-football star Lionel Dawson (Hugo Weaving) have left the emotionally vulnerable Tracy shaken and confused. When Tracy's modest dreams of a happy life catch the attention of feared criminal kingpin Bradley "The Jockey" Thompson (Sam Neill), she is forced to place her fragile trust in the hands of her skeptical mother and take one last trip into the past to confront her greatest fear. ~ Jason Buchanan, Rovi

Anh Do
as Tran

Lily Nguyen
as Other Girl (Reunion)

Stella Ha Vi Do
as Woman in Video Shop

The actors give performances of intense naturalness.

Strong performances and meticulous direction make this consistently disconcerting, but the subplot distracts from the moving human drama.

It's a sober, sensitive film ... about degrees of dependency, grief, guilt, recrimination and recuperation.

It's a tidy showcase for Cate Blanchett as a recovering drug addict struggling to throw off the shackles of her past, but Sam Neill and Hugo Weaving also shine ...

A small film with a big cast, Little Fish is notable for its performances.

If you say you'd watch Cate Blanchett in anything, here's your chance to prove it.

Cate Blanchett like you've never seen before, gritty and stripped down. Both in look and performance.

It's an incredible performance [from Cate Blanchett].

A superb cast, mostly playing roles against type, make Little Fish a captivating and emotionally involving film, delivered with the flourish of a filmmaker who knows his craft and what to do with it to reach his audience.

Little Fish will leave you full of admiration for its undeniable craft, but perhaps also not entirely sure what its point is.

Blanchett is superb as Tracy, a recognisable and believable character attempting to put her past behind her.

Blanchett is at her best in a complex, gripping role.... Weaving is a revelation, going completely against type.

Rich Cline
Shadows on the Wall
View All Critic Reviews (29)

A very gritty Australian film, with of plenty of natural performers. Slow moving at times, but a story that was kind of unavoidable, in your face and was told with a lot of reality.

I recognize Little Fish's failures, but for some reason I found it utterly heartbreaking.

An all-star Australian cast work this wonderfully scripted drama to its full extent. What starts of as a complex drama soon turns into that of a crime drama. It is to the films credit that the evolution of genres is handled rather well and goes mostly unnoticed. The film relies more on subtle hints to the past of the characters, and even leaves us with an ending that needs some thinking about. This may not be to everyone's liking but it really does make it a more involving piece. It's gorgeously shot, with lighting used coming off as something other-worldly with great beams shining down from street lights and headlights. A great drama that doesn't quite have a conclusion that the film hints towards earlier on.

Great performances raise this Australian tale of the struggle to move on and what to keep from your past, above the norm.