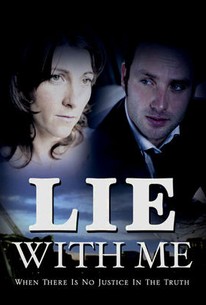 Thanks to the wonders of GHB, a young London woman loses all memory of her own rape and her best friend's murder in this two-part British television thriller. Plain-Jane Ros (Eve Best) lives with her party-girl mate, Jo (Stacey Roca). When Jo turns up dead and Ros is found drugged and raped, suspicion naturally falls on Jo's married lover, smug businessman Gerry Henson (Paul McGann). But when Gerry's accommodating wife (Amanda Mealing) provides him with an alibi, police inspector Will Tomlinson (Andrew Lincoln) is outraged -- especially given the feelings he's begun to develop for Ros. Unwilling to let the man she knows to be guilty walk free, Ros pretends to recover her memory and helps send Gerry to prison. Unfortunately, though, an anonymous campaign of harassment soon convinces Ros and Will that not only does somebody know about their deception, but they've helped convict the wrong man. Originally broadcast November 15-16, 2004, on Britain's ITV network, Lie With Me made its stateside bow June 5-6, 2006, on BBC America. Director Susanna White, who previously teamed with Lincoln for the dramedy Teachers, would go on to direct the BBC miniseries Bleak House and Jane Eyre. ~ Brian J. Dillard, Rovi

Critic Reviews for Lie with Me

There are no critic reviews yet for Lie with Me. Keep checking Rotten Tomatoes for updates!

There are no featured reviews for Lie with Me at this time.

Lie with Me Quotes