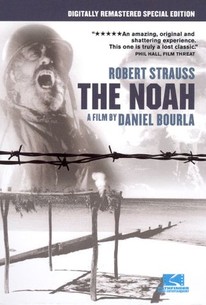 Nuclear warfare has decimated the planet, and as the last surviving member of the human race struggles to maintain his sanity by creating an imaginary companion, his slipping sanity banishes the rules of a bygone society in director Daniel Bourla's haunting "lost" classic. The mushroom clouds have risen and the modern civilization has fallen, leaving one lone survivor to preside over a devastated land of rubble and ruin. It's all too much for Noah to comprehend though, and in the months that follow the increasingly delusional survivor creates an imaginary friend with whom to share his sorrowful new world. As time wears on and Noah's denial grows right along with the population of his imaginary civilization, the rules of modern society as he once knew it gradually erode into a forgotten whisper of a forgotten world.

Critic Reviews for The Noah

For all its oddity and its haunting effect on our sensibilities, The Noah delivers a conventional anti-war message.

An amazing, original and shattering experience. This one is truly a lost classic.

There are no featured reviews for The Noah at this time.