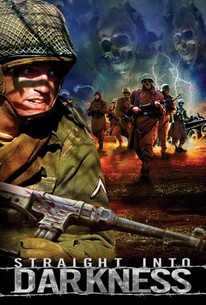 The horrors of war flow deep in the veins of two young American G.I.s who desert their platoon during the waning days of World War II in Leatherface: Texas Chainsaw Massacre 3 director Jeff Burr's chilling tale of terror on the battlefield. Despite the best efforts of Allied forces, Axis troops still have a stronghold over many key European outposts. With time quickly running out before they are attacked by the enemy and branded deserters by their own battalion, these two desperate soldiers soon team with a deadly band of killer orphans to take out a key Nazi base and secure yet another victory for the increasingly powerful Allies.

Critic Reviews for Straight Into Darkness

This is one of the finest war movies to come along in years.

Once it's over with, you may feel cheated since you realize that it never went much of anywhere.

...even though I think the film is fundamentally flawed, there are quite a few things to recommend it.

While it's clear that this movie is trying to making a general anti-war statement, the story elements don't add up to a big picture about anything in particular.

Reminiscient of Keith Gordon's fantastic A Midnight Clear mixed with a healthy dose of Rod Serlingism, Straight Into Darkness is a dark and stark little tale.

Audience Reviews for Straight Into Darkness

There are no featured audience reviews yet. Click the link below to see what others say about Straight Into Darkness!