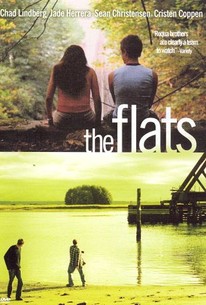 The writing and directing debut of brothers Kelly and Tyler Requa, The Flats is a coming-of-age comedy drama set in the rural Northwest by Puget Sound. In the last days of summer, charismatic Harper (Chad Lindberg) spends most of his time partying and hanging out with his best friend, law student Luke (Sean Christensen). During one of his many drunken stunts, Harper gets arrested for vandalism and must decide whether to serve his sentence or escape. In his week left of freedom, he drinks away his time with a circle of joking friends, including Tully (Luc Reynaud), Kate (Cristen Coppen), and Mark (Danny Pickering). Eventually, Harper meets Luke's girlfriend Paige (Jade Herrera) and a romance follows that may cause a conflict between the two friends. Originally shot on Super 16 mm, The Flats features a folk-rock score composed by star Christensen.

Critic Reviews for The Flats

A dialog-rich story with a strong sense of place that will remind you of Diner.

Audience Reviews for The Flats

There are no featured audience reviews yet. Click the link below to see what others say about The Flats!