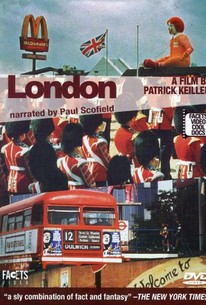 A side of London rarely experienced by tourists is seen in this spare, austere mix of narrative film and documentary. The filmmaking team behind Robinson in Space returns to the capitol of the United Kingdom to find out just how much a modern city can change in the short window of seven years. Upon returning to London to tour the city with his longtime lover Robinson, a mysterious traveler (Paul Scofield, heard only in voice-over) sets his sights on a series of fascinating historical locales made famous by such popular authors as Edgar Allen Poe and French poet Charles Baudelaire. In their journeys through city streets once brimming with vitality, the traveler soon finds that London has become but a shadow of its former glory due to the damaging effects of pollution, IRA bomb scares, and urban decay.

The British Tourist Authority wouldn't like London much, but it's the most ambitious, provocative and engaging new British film to surface in a long while.

London as a 'ghost town', the first post-historical city, a place that has outlived itself.

The film's melancholy power lies more in its stationary camera, whose mistily anaesthetic images amount to a disaffected traveller's slide-show of an unreal city.

This is the first of the two travelogues of our anonymous commentator and his companion Robinson, the second one being the awesome Robinson in Space. Essentially this is a travelogue of London in 1992. It concentrates on locations and issues within London precious to the commentator, and also on the political and social events of the time. The film is shot mostly as stills of the locations visited, and is very well observed. One sequence which lingers for me is the film of the aftermath of the IRA bombs in the City of London at that time, which are eerily beautiful. The election of 1992 is recorded and commented upon, and the monarchy dont escape unscathed. The writer is very very obviously a socialist, and the commentary is heavily 'Old Labour', but is in turns informative, witty, and thought provoking. It attempts some major social points, but is preaching to the converted somewhat, this is definitely for the Art House Crowd - You would never see this at a Multiplex. However, is good to see it on film