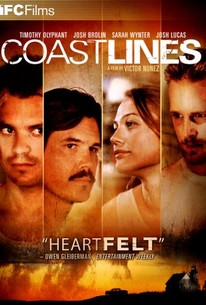 Critics Consensus: Coastlines features solid lead performances, but is hindered by an unconvincing love triangle and scattered direction. Not up to the standard of Victor Nunez's previous directorial efforts.

Critics Consensus: Coastlines features solid lead performances, but is hindered by an unconvincing love triangle and scattered direction. Not up to the standard of Victor Nunez's previous directorial efforts.

Critic Consensus: Coastlines features solid lead performances, but is hindered by an unconvincing love triangle and scattered direction. Not up to the standard of Victor Nunez's previous directorial efforts.

Victor Nuñez's Coastlines centers on Sonny (Timothy Olyphant), who is returning home after his release from prison. When he asks for money owed to him by local crime boss Fred Vance (William Forsythe), Vance responds by blowing up Sonny's home (causing the death of Sonny's father). Sonny moves in with old friends Dave and Ann (Josh Brolin and Sarah Wynter), even though Dave is now a policeman. Ann, who has grown bored by her husband's conversion from wild man to cop, begins an affair with Sonny. Nuñez wrote this script before his breakthrough films Ruby in Paradise and Ulee's Gold, but directed it after making those movies. Coastlines was screened at the 2002 Sundance Film Festival.

Blake Lindsley
as Redhead in Bar

Rachel Plotkin
as Blonde in Bar

Aaron Stephens
as Patrick
View All

Critical Consensus: "The Break-Up" Gets Dumped

It's flawed but no less fascinating for its mood of simmering tension on the fringes of the American dream.

The third entry lacks the subtle power of the previous two efforts.

The talent is still there, the film better than most. It just needs less crime, more love.

Keeps you entertained throughout its two hours, which says a lot about Nunez's storytelling.

A skeeter noir bogged down in the unconvincing pulp of a melodrama without conviction.

Proves that while Ulee's Gold was an exceptional movie, it wasn't a fluke. Nuñez just needs to search past the Panhandle for fresh material.

Seems to want to make a point but never does.

There's so much simmering behind the characters that the film seems to get away from Nunez, which is fine. The messy emotions and illogic of human nature defines this drama.

Despite good performances, this attempt to intertwine a crime thriller with a love triangle never gels...Fans of Ulee's Gold, Ruby in Paradise, and A Flash of Green are likely to feel disappointed by this decidedly lesser effort.

What movie starring Josh Brolin, Timothy Olyphant, and Josh Lucas could be bad?? I'll tell you: this one. Slow. Boring. Pointless...I had a very hard time staying awake.

[font=Century Gothic]"Coastlines" starts with Sonny(Timothy Olyphant) returning home after spending three years in prison, being greeted by his old friend Dave(Josh Brolin) and his wife Ann(Sarah Wynter). Dave, a policeman, is worried that Sonny will fall back into a life of crime. And his concern is definitely warranted since Sonny pays a visit to Eddie Vance(Josh Lucas) and his uncle Fred(William Forsythe) to inquire about the money that is owed him. Despite Sonny's previous loyalty, the Vances fear trouble and contact a hitman...[/font] [font=Century Gothic][/font] [font=Century Gothic]"Coastlines" is a disappointing movie from Victor Nunez whose two previous films, "Ruby in Paradise" and "Ulee's Gold," were well-acted, low-key and emotionally resonant depictions of small town Florida.(In fact, "Ulee's Gold" was my pick for best film of 1997.) This time around, he stumbles badly with cliches(starting with an ex-con returning home facing choices...), pedestrian directing, general lifelessness and an anti-climax. Just about when it looks like the story will pick up, it falls into a rut, never to escape. And it is always best to let things simmer, instead of relying on unnecessary explosions. Maybe it would have helped if Josh Lucas had been cast in the lead. I am not saying he is a great actor but at least he has a pulse and could have made Sonny at least a little interesting.[/font]