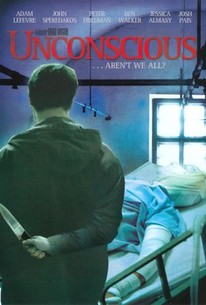 Critics Consensus: A comedy that tackles outrageous subjects (pornography, transvestism, bisexuality and drug abuse) with both grace and mischievous glee.

Critics Consensus: A comedy that tackles outrageous subjects (pornography, transvestism, bisexuality and drug abuse) with both grace and mischievous glee.

Critic Consensus: A comedy that tackles outrageous subjects (pornography, transvestism, bisexuality and drug abuse) with both grace and mischievous glee.

One man's identity makes for a difficult mystery to solve in this independent comedy drama from director Bradley Wigor. After a life-threatening accident, a man lies unconscious in a hospital bed, while police and doctors try to find out who he is. The mystery man's profile has been compared to a number of people recently reported missing and sought by the police. Things take a complicated turn when the injured man's particulars match up in different ways with six different men, leading to a number of people being eager to determine who he really is. Featuring Adam LeFevre, John Speredakos, Peter Friedman, and Jessica Almasy, Unconscious received its world premiere at the 2006 Palm Beach International Film Festival.

The film is sustained effortlessly by the charismatic Watling and Tosar, who are among Spain's most popular movie stars.

The comedy is too broad, lacking the subtlety that the film's high-brow intentions require.

The Freudian farce Unconscious is paced so breathlessly that it keeps you panting to keep up with each new plot twist.

Even with nothing more redeeming than a lot of good one-liners, Unconscious has a charm that your ego, superego and id can all enjoy.

Are the Spanish the only ones these days able to make movie comedies that are smart, sexy, wacky and graceful all at once?

The movie's message is clear: Freud's greatest contribution to society was not the idea that all little boys long to sleep with their mothers -- rather, it's the concept of the unconscious, a hidden place where our secret desires yearn to be free.

Laboring in the wide shadow of Almodóvar and lacking much in the way of visual distinction, Unconscious compensates with its cast's full-tilt commitment to rip-snorting farce.

Oristrell is a modern day Woody Allen, although with a better sense of rhythm and naughty buffoonery. You'll laugh from corners of your subconscious you didn't know you had.

When it is good it is very, very good, and when it's not it's mediocre.

Everything you always wanted to know about sex, and then some. A bawdy, early Woody Allen-esque slapstick comedy!

[font=Century Gothic]In "Unconscious", it is 1913 when Alma(Leonor Watling), extremely pregnant, fears her husband, a psychologist, is missing or worse and goes to her brother-in-law, Salvador(Luis Tosar), also a psychologist, for help. But he has problems of his own, namely his wife, Olivia(Nuria Prims), is perpetually jealous of her sister, he is passed over for a promotion and, to put it gently, he is incapable of pleasing his wife. Alma discovers a thesis that her husband had written about four hysterical women, and feels that this is the key to finding him, especially after he leaves instructions for it to be destroyed.[/font] [font=Century Gothic][/font] [font=Century Gothic]"Unconscious" is an amusing psychological mystery that is set at the the dawn of the modern age when psychoanalysis was becoming introduced to help people, the corset being fazed out, and World War I bringing an end to some of the outdated oligarchies of Europe. Alma is herself a modern, liberated woman rushing into man's world and has read everything from Marx to Bronte. All of which are signs of the beginnings of a free society where an open mind is required.[/font]