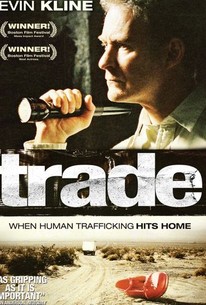 Critics Consensus: With an exploitative style that seems more suited for TV shows like CSI, Trade's message about the reality of child exploitation is easily lost.

Critics Consensus: With an exploitative style that seems more suited for TV shows like CSI, Trade's message about the reality of child exploitation is easily lost.

Critic Consensus: With an exploitative style that seems more suited for TV shows like CSI, Trade's message about the reality of child exploitation is easily lost.

Adriana is a 13-year-old girl from Mexico City, whose kidnapping by sex traffickers sets in motion a desperate mission to save her by her 17-year-old brother, Jorge. Trapped and terrified by an underground network of international thugs who earn millions exploiting their human cargo, Adriana's only friend and protector throughout her ordeal is Veronica, a young Polish woman tricked into the trade by the same criminal gang. As Jorge dodges immigration officers and incredible obstacles to track the girls' abductors, he meets Ray, a Texas cop whose own family's loss to sex trafficking leads him to become an ally in the boy's quest.

Mayahuel DelMonte
as Woman at Door

John Wylie
as Pedophile in Reeds

Barbara Mayfield
as Waitress in Diner

Matthew McDuffie
as Pedophile in Diner

If only the whole matched the power and potency of the details. Masquerades as a searing exposé, but turns out to be a lurid and overwrought account.

As cinema, 'Trade' is flawed: the script is functional and the dry characters are hemmed in by the machinations of an unremarkable plot.

This cockeyed odd-couple road movie is well-intentioned, but it comes perilously close to feeding off the crimes it condemns.

Is it possible to agree with what a film is saying while disliking the way it says it? Trade leaves no arm untwisted and no message unrammed.

Jose Rivera's script plays uneasily, as do some of the directorial flourishes: the shots of rose stems and caged birds are galumphingly emphatic at moments that need no underlining.

A ruthlessly disturbing yet important film.

The delightfully boyish queer helmer Marco Kreuzpainter now does a complete switch in theme and tone to tell the story...

A brutal, shattering story of child trafficking that is intended to deliver a sobering punch about the global human trafficking trade, Marco Kreutzpaintner's powerful drama is in fact based on investigative reports in the New York Times.

Such difficult subject matter requires a harder-edged delivery, but hopefully this accessible drama will therefore get its message across to a wider audience.

Kline and the talented Gaitan do their best to engage on a human level, but ending with various sobering stats about the global sex trade only underlines the film's woefully misplaced dramatic emphasis.

The less you know about this film, the more it hits you like a hammer. It follows a desperate Mexican boy who's adorable sister has been kidnapped into the USA, presumably as sex slave. After teaming up with cop Ray his chances get better, but it's still a hopeless race against time. The outstanding acting, cinematography and overall atmosphere of the film make for a highly uncomfortable feeling, intentionally so, of course. You can't help but hope for everything to turn out at least okay, but every set back makes you less optimistic about it. Thankfully, the film never gets preachy or dramatic just for drama's sake. For the longest time it's even painfully realistic, even if one of the later twists may be a tad too much. Still, this is gloomy, enthralling and disenchanting look on sex trafficking that should leave no one untouched.

Awesome movie about Child abduction and sexual slave trade that goes on throughout the world. This is about a 13 year old Mexican Girl who is abducted and what her 16 year old brother does to save her. Very enjoyable and eye opener. 5 stars

Great movie showing the darkness people are capable of doing to others. Very well acted and a sweet story of a brother doing all he can to help his sister with the help of a stranger. Tough to watch a few scenes, but it brings the necessary emotions.

Mind numbingly soberering. as a father of two young daughters this is my worst nightmare. The fact that the movie is based on what happens every day is a chilling reminder of how far we have yet to go as a society.