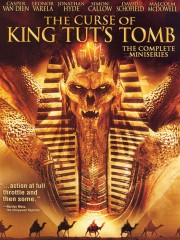 The Curse of King Tut's Tomb

Super Reviewer
Alex r
½ April 18, 2014
Made for TV films are usually a bad idea, and this film is proof of that. This horror thriller film is a poorly written, directed and acted. This is also a boring film, one that has nothing going for it, and it's a shame because if this wouldn't have been made for TV, maybe the film would have had a chance. As it is, it's a poorly written story that is pointless, and not exciting. The film also has some poor special effects, which are laughable, and it just makes this film looks even worse. This is the type of film that is made with no care in trying to make something truly entertaining and watchable. Directed by Highlander director Russell Mulcahy, this made for TV action horror thriller just doesn't grab your attention due to poor performances, lack of any good storyline and awful looking special effects. Don't watch this film because you are simply wasting your time, as the film is just a long, none entertaining bore. Watching paint dry is more exciting than this film. The cast stars Casper Van Dien, who since starring in big budget films like Starship Troopers and Sleepy Hollow is now a B movie, schlock film actor, and it's no secret why. He simply can't act. I think however that it's a shame that Mulcahy would direct this trash because he has made some good films in the past, notably Highlander and Razorback. With this film however, he just wastes his talents on such a poorly thought film, and it shows in the finished film. This film is a ridiculous attempt at horror, one that doesn't succeed and it's a film that fails to really grab your attention.

Bengel W
October 19, 2013
A family movie aimed at the Children though the adults may find it entertaining. Script is loose and simple as is the story though the CGI is of a reasonable quality to keep one entertained. The action is of sufficient fun to enjoy a laugh and hope that the heroes make it. Nibbles: Calamari

Luciano G
February 16, 2013
Aventures and fantasy in the ancient Egypt with cheesy FX,......if you're in the mood for some light entertainment watch this....

mike d
October 3, 2012
Pretty bad........It has nice photography...some good actors (which was interesting spotting them - always is)......but just really kind of odd and frustrating...tedious....with good bits and bad bits going on throughout...... and...... at three hours long it tested the patience a bit...

Utibe I
½ September 20, 2012
This movie seems to be unpopular but it's just my take, I love anything Egypt. It doesn't have 2 be like d Mummy. I agree though, the ending was poor. Casper and Leonor were cool.

Sergel C
November 22, 2011
If nothing else, The Curse of King Tut's Tomb proves that the B-movie is alive and well.

Robert H
October 11, 2010
A little Indiana Jones meets Lara Croft Tomb Raider meets The Mummy in this very long made for TV movie.
Originally aired in 2 parts, you can clearly see where the commercial breaks are supposed to happen. While it probably made sense when first aired, watching it without the commercials is a little distracting. The cliff hangers really aren't much when the resolution is shown 1 second later.
Casper Van Dien is his usual self. Nice to look at but painful in the acting department. Of course, as this film isn't quite played straight up, it doesn't come across as bad as it would normally.
While the CG is a little lacking in quality, I never felt that it was so bad as to make the film less enjoyable.
My biggest beef is also what I enjoyed most about the film. The story seems to go off in so many directions that it lacks a tight sense of timing while at the same time, it manages to tell a complete story without feeling as though it left anything out. So while you could have ended the film much much sooner and have achieved the same story, you wouldn't have portrayed the level and length of time shown in the film. There is none of this, "one week later" stuff going on. Everything feels as if it's happening in real time. Sure it could have been tighter but had they reduced the run time, they couldn't have split it into 2 parts successfully.
Worth checking out as I was completely surprised at just how decent the film was and I'm sure you will be too.

maria c
June 1, 2010
i really enjoyed this movie great action and adventure every part was fun and the protrayial of the boy king was cool! i got to say the final battle was soo short not a really big on the anamtronic set creature scary yes but too fake in my opnion!

hunter i
½ February 16, 2010
Pretty long movie, I know it was not a musical, and I hope not. Really intrensting, but it was a little boring, but it still has good epic stuff.

Bobby L
February 9, 2010
This was a Mulcahy film I had my eye for awhile, without knowing it was one of his films (my recent viewing of Give Em Hell Malone and loving it has prompted me to look closer at his lesser work), but because it stars Casper Van Dien; an actor built for B-movie status. He always has an eager to please, let's just have attitude, and while his range isn't remarkable, that aura makes him quite likable. Plus, it's a B action/ adventurer, which can easily be some of the best. I was not disappointed.

Set in 1922 era Egypt, the period detail, is mostly, very strong, in that "movie period" kind of way. The only issue I do have, is with the female lead. She looks and dresses (for the most part) like a modern day woman, and only two or three of her costumes looked period. It kind of destroyed the fun happening on screen, because of that. The art design and set design is really good. King Tut's tomb, once found, is a nice mish-mash of ancient Egyptian and a deity resting lodge, which is what it is. Here, Tut is an immortal deity put on Earth to protect it, but during his reign, he had to sacrifice himself in order to destroy the worst of all evils, Seti.

The movie hits almost every cliche you can imagine, but never takes itself too seriously, which helps with the fun. Also helping, is some of the wittiest and most fun dialogue I have heard from a made-for-TV movie since the 1990s Merlin. Seriously, the dialogue is all sorts of ridiculous and tongue-in-cheek. Here's an example:

Upon learning that Freemont (Van Dien) has locked the entrance to the tomb with the lock from the Minotaur's labyrinth, which is said to be impossible to break or pick in anyway:

Underling- "How do you expect to get in? That lock is impenetrable, made by the gods themselves."

Sinclair (main baddie)- "That was thousands of years ago, before dynamite."

Character actor Jonathan Hyde plays Sinclair, rival archeologist to Dien's Indy-esque Daniel Freemont, and with his British accent, sells that bit with beautiful deadpan humor. The whole has a great sense of humor like, which is nice, given there's not a cliche we don't bloody hit.

The acting is rather good, with Dien being more likable than usual, and he really suits this time period. The clothes work on him. Hyde is deadpan, as stated, and it's great to see. Leonor Valera as the female lead, aside from never looking like she's in the right era, does well, and is a strong character. Her chemistry with Dien is surprisingly high, and watching their back-and-forth is given nice depth because of that. Malcolm McDowell has a fun, bit role here, that he relishes and chews some nice scenery.

Mulcahy does an excellent job of orchestrating all of this into a fun, pulp adventure. He keeps everything moving along quite nicely, and at just under 3 hours, it's an impressive feat that there's nothing that was boring and no really unnecessary scenes. His cinematographer and he use excellent lighting and lots of wide angle shots to show off their impressive sets.

There are a few bad things here though, and as already stated, this does hit every cliche it could think of. Also, the CGI varies wildly from decent to awful.

Gregory M
July 26, 2009
How does Casper Van Dien get cast in anything? Seriosuly. Decent production value makes up for a lot.

Rachel J
May 5, 2009
Love it the dude who plays King Tut makes him look real sexy.

Kong K
March 21, 2009
This show is good. Was surprised it was a mini series. Casper Van Dien's archaeologist character dressed like Indiana Jones minus the whip. The setting and plot is not boring at all. The ending could be better but not worse like some of his other shows.

This movie is the most copy i've ever seen. The main character is so much of a copy of Indiana Jones. On the credits it should say Van Dien as Indiana Jones, i mean Danny Freemont
Page 1 of 4