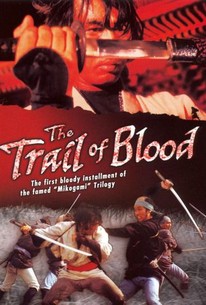 A wandering yakuza solder seeking redemption finds that the only path out of the underworld leads the fiery inferno of hell in this slice-and-dice tale of revenge bloodshed. Jokichi has lived a life of crime, but now he's ready to turn himself around. In a land where two warring gangs are willing to slaughter anyone who gets in their path, it's hard to live an honorable life though. When death comes to his doorstep and his entire family is murdered by vicious mobsters, Jokichi must ensure that he survives long enough to cut down as many of his enemies as possible. An action-packed tale of vengeance and fury, The Trail of Blood is the first installment of a violent trilogy that also includes The Fearless Avenger and Slaughter in the Snow.

Critic Reviews for The Trail of Blood

There are no critic reviews yet for The Trail of Blood. Keep checking Rotten Tomatoes for updates!

Audience Reviews for The Trail of Blood

There are no featured audience reviews yet. Click the link below to see what others say about The Trail of Blood!

The Trail of Blood Quotes