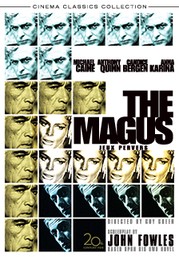 suz e
½ November 26, 2011
This movie is worth seeing as an artifact of its time, but not on its own merits as a film. Michael Caine is too old for the role of Nicholas Urfe, and he gives a flat and disengaged performance. Anthony Quinn fares better as the mysterious Conchis.

The novel is 600+ pages of intrigue and philosophy, and it's not going to translate to the screen without heavy editing. Unfortunately the screenplay chops up the plot to the point of incoherence. Some changes (like Australian Allison becoming French Anne) seem pointless.

The best thing you can say for the direction is that the location is very pretty. The plot twists that are gasp-worthy in the novel are unfortunately baffling to unintentionally funny in the movie. I would love to see a modern remake of the Magus in the hands of David Fincher, or perhaps David Lynch. The Magus deserves better treatment than this film.

Super Reviewer
Aj V
December 11, 2010
This movie is pretty interesting and mysterious until you get to the horrible ending. I liked Caine in the movie, but that's about it. This movie is so-so.

TonyPolito
August 22, 2010
Yes, Woody Allen famously stated if he had his life to do over again the only thing he would change is to not see this film. An understandable quip, but don't be entirely put off by it.

It IS a quite poor adaptation of an amazing, mysterious and voluminous novel (which I could not put down once started). However, its uniqueness makes for difficult cinema, even with author Fowles crafting the screenplay.

Michael Caine is the pawn; a teacher who runs away from Britain and his romantic commitment there (Karina) to take on a boarding school position in Greece (shot in Majorca locations). Quinn's the chessmaster, puppeteer, mystic/magician, who weaves Caine up into a set of logical impossibilities surrounding the presence of temptress Candice Bergen. Including the impossibility that Caine can see her standing at the foot of a cliff ... and atop it ... at the very same time.

Every step Caine takes toward the solution ends up two steps further away - but ever closer to the center of the black widow's web within which Bergen awaits. Soon enough, both Caine and the viewer teeter on schizophrenic paranoia.

Karina's as captivating as she was in "Pierrot le Fou" three years earlier, when she was still Godard's lover.

RECOMMENDATION: Worth a viewing - for only for inquiring minds that never intend to take on the reading.

Alec M
½ August 5, 2009
Woody Allen has called this the worst movie he's ever seen...while certainly not the worst i'VE ever seen, having read the book, and liked that a lot, and seeing the movie to remind me of aspects of the book, this has some incredibly flat performances.

Codrutz
July 20, 2009
A big piece of crap. I'm Terribly disappointed of this movie. It didn't followed the story of the book at all and they actually thought that is gonna be better to actually change the novel. Wtf?!? Who gave you that right? I know something, if you really want to make a remake of a book, then you MUST follow its story. A little advice for the fans of the book. If you enjoyed the novel, then remaine with that opinion. Don't see the movie. IT WAS A MESS!

Erik W
½ July 2, 2009
The only thing that really impressed me about this film was the cinematography. British cinematographer Billy Williams definately filmed the greek locations very well. The performances were very good but that's to be expected from Caine, Quinn and Bergen who were good at just about anything they've done.

As for the story itself, I got lost in some places. But I haven't read Fowles's book so I might have understood it better if I have.

Rob S
January 26, 2009
awesome book. not a good movie. fowles has hacked his own story to pieces with the screenplay. the acting was really terrible. i know this is supposed to be acting within the film, but we're supposed to be at least partially fooled by it at times. and who the hell cast middle aged michael caine as a 25-year-old kid? the music was completely over the top, a distraction in every scene. the camerawork was laughable. the worst thing, though, was the editing (and I pay no attention to editing). it made the whole story seem rushed. true, they had a full 600 pages of plot twists to fit into a 2-hour movie, but watching the film shouldnt make you feel that way. 2 stars for anna karina topless, something i never thought i'd see.

dont let any of this reflect on the book, though. it's amazing.

Thomas E
September 7, 2008
Well, as the screenplay was written by Fowles it is pretty faithful to the book. Anthony Quinn is okay as Conchis but never fully convinces as a mastermind of disinformation. Don't get me started on Caine. Woefully miscast in every film other than Get Carter his sole sneering expression and 'SHAAAATING!' diction never fails to get on my nerves. There are none of the nuances of Urfe's character. Even though he's meant to be contemptible for his heartless philandering he's not this detestable.
The stately pace of the book is lost somewhat being condensed into a two hour film but the main problem is the same old story: characters you have formed in your mind made flesh will more often than not prove disappointing. It's not a total loss though. The scenery is beautiful, it's probably never less than intriguing if you haven't read the book, Candice Bergen and Anna Karina are 60's perfection and the film plays somewhere along the lines of The Wicker Man or The Game with a naïve stranger being hood-winked by everyone around him. So I'd probably file it under 'C' for 'Curio'.

Michaela R
September 4, 2008
A pretty, pastel Cain naked on the beach; is it my birthday? So good! Fowles hits this one out of the park!

Scumbalina
August 26, 2008
although it may seem to go nowhere, this film truly put me in a trance. The lush Greek settings and confusing shenanigans will make you feel under the spell of the Magus. Not for everyone.

Jason G
½ July 9, 2008
Suffers mostly from the lack of seamless flashback transitions and poor-ish editing styles that have become far more sophisticated and commonplace in the decades of film-making since it was made.

THE MAGUS is filled with a number of flashbacks... scads of improbable events... and many "out of left field" situations that are interspersed throughout the film without any sort of differential or indication of when one scenario begins and another ends. It takes awhile to get used to this form (or lack of...) editing. Perhaps this was intentional on the part of the film-makers to include the audience in the main character's sense of overall confusion, frustration and inner struggle but it is a quite jarring method of doing so giving the film a feel of having had it's "edits" rushed.

THE MAGUS has a great cast who (at times...) seem to really be "over-acting" until you realize what's going on in the film and how appropriate their "hamminess" actually is.

Quinn and Caine are excellent, and the film offers up enough metaphysical conundrums and brow-furrowing situations to keep you watching till the end. THE MAGUS is worth seeing a few times as it's unlikely you'll catch everything that was intended to be caught the first time out.

Bizarre is a good word for this one... but in a good way.

Fans of the book may be somewhat disappointed despite author John Fowles' involvement with the film itself, but very few films from books are as good as their source material.

Keep this in mind and you should be able to sit back and be entertained by THE MAGUS.

Margarita G
June 25, 2008
Watched it because of Anthony Quinn, really. I've also read the book... I literally ate this novel... devoured and tasted it page by page from cover to cover. John Fowles at his best! I loved the atmosphere, the heavy summer heat and his depiction of the Greek isles. The film is really bad. Very bad. I wouldn't recommend it to anybody except if interested in a filmed version of the book. Nicholas is no good, totally improbable :)

Peter M
May 23, 2008
A reasonable version of a fantastic book. Quinn makes a great Conchis but Caine a less Good Nicholas. For total satisfaction reread the book.

Bill W
½ January 6, 2008
What? Why? To get Michael Caine and Candice Bergen in the same film as Anthony Quinn apparently. There's a quote from T. S. Elliott in there a couple of times. Stop being intellectual about this. The film isn't any good.

Elizabeth S
December 5, 2007
I had a conversation with someone today about this movie (from 1968) and tried to remember it. I read the book several times, and studied with John Fowles in London. He loved to pose puzzling scenarios and several alternative endings. It is somewhat frustrating to watch the movie if you loved the book. I'm not sure Michael Caine was the right actor for the lead. Anthony Quinn ? Well, all the elements didn't quite come together. But for a young person, bursting with wanting answers to their many questions about love and life, the book and characters are the beginning of the hint that easy answers will never be forthcoming, and that indeed, things are seldom what they seem. Ah mystery! Is it possible anymore in our too wised up world?
Page 1 of 2