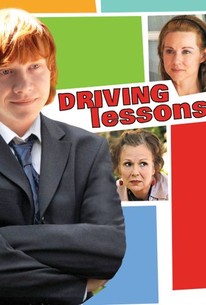 Critics Consensus: Though it has charm, Driving Lessons is a middling offering in the genre where the youngster coming of age meets a quirky senior who teaches valuable lessons about life.

Critics Consensus: Though it has charm, Driving Lessons is a middling offering in the genre where the youngster coming of age meets a quirky senior who teaches valuable lessons about life.

Critic Consensus: Though it has charm, Driving Lessons is a middling offering in the genre where the youngster coming of age meets a quirky senior who teaches valuable lessons about life.

Two strong-willed women wield their influence on a shy teenaged boy in this coming-of-age comedy from the United Kingdom. Seventeen-year-old Ben (Rupert Grint) is the son of a soft-spoken vicar (Nicholas Farrell), but it's his mother, Laura (Laura Linney), who rules the household, and she has put Ben cheerfully under her thumb, keeping him busy with a variety of good-will errands for the church and numerous local charity causes. With summer vacation looming before him, Ben is looking forward to learning to drive, but Laura is more interested in spending time with one of the more charming members of the church staff than helping Ben learn how to operate the family automobile. Wanting to earn some pocket money, Ben starts looking for a part-time job and ends up working for Evie Walton (Julie Walters), an elderly and slightly eccentric actress who needs help keeping her garden in shape. Laura believes Evie isn't an especially good influence on her son, though Ben is happy to find someone who encourages his interest in poetry and the larger world (especially girls). One day, Evie announces that she needs to ride to Edinburgh, where she is supposed to give a reading as part of the city's massive music and arts festival. While Ben doesn't have his license, he volunteers to take the wheel, and soon he's confronted with various forms of decadence that his mother has frequently warned him to avoid. Driving Lessons received its North American premiere at the 2006 Tribeca Film Festival.

Harriet Brock
as Child at Campsite

James Brock
as Child at Campsite

Stanley Brock
as Child at Campsite

Critical Consensus: "Man of the Year" A Weak Candidate, But At Least It Was Screened For Critics

Writer-director Jeremy Brock has backloaded much of the hero's family conflict into the final scenes, which collapse under the weight.

Driving Lessons is a poignant miniature that offers [Julie] Walters a chance to be typically wonderful - saucy but deep - and [Rupert] Grint to stretch quite commendably.

... the film hardly resonates five minutes after it's over.

Barely worth the trip.

It's an exercise in calculated high-quirk in which the most egregious forms of stereotyping -- particularly along gender and religious lines -- attempt to pass for 'human' behaviour.

Driving Lessons is as dull as its title.

They say that truth is stranger than fiction, but as we see in most autobiographical coming-of-age films, adolescent truth is just as boring as adolescent fiction.

The highlight here is most certainly Julie Walters, who hams it up royally, and does a fine job of making her role as an aging actress more than just a cartoon character.

Too many alcoholic outbursts and pitiful breakdowns wear down your patience.

CAST: Rupert Grint, Julie Walters, Laura Linney, Nicholos Farrell, Oliver Miburn DIRECTED BY: Jeremy Brock SUMMARY: A coming of age story about a shy teenage boy trying to escape from the influence of his domineering mother. His world changes when he begins to work for a retired actress. MY THOUGHTS: It was exactly what I was hoping for. An offbeat dark comedy. Light on the darkness though. Julie Walters was brilliant in this movie. She's so funny in this film. First time seeing Rupert Grint in a film besides the Potter one's. He did good in this film. He plays a very shy boy but aged with a poets soul. Just wanted to watch a movie that would make me genuinely laugh without trying to hard, and this film did it for me. Fun movie with some serious stuff going on in it as well. His mother is a bit insane. My opinion, but I don't think many will disagree with that comment. But all in all, a good watch. See it if you get a chance.

very charming! rupert grint comin into his own. Julie Walters was GREAT!

Didn't quite go where I thought it would, but it was a good movie. Laura Linney plays the type of mother you would want to strangle to Ruper Grint, also good as a sheltered, shy teen who goes to work for Julie Walters's character who is either eccentric or a bit crazy. Some of it wasn't quite believable, like the girl he picks up (or other way round, to be more exact), but this mostly works and is a good coming of age film.

Because I would very much like to see Rupert Grint, Emma Watson, and Daniel Radcliffe succeed in their acting work beyond the wonderful Harry Potter movies, I wanted very badly to see this. But because Laura Linney is a part of the project, I didn't exactly fire this one up my netflix queue. It finally did bubble to the top, and I've watched this now three times with great interest.

The good news is that Linney does not appear throughout. In fact screen time is so dominated by the relationship between Grint and Julie Walters that Linney fairly fades into the background, appearing only in the bookend (dismal) home life scenes for Grint.

The better news is that Linney plays quite a villainous role; she's perfect for that kind of work.

The best news, however, is that Grint does manange to do a good job of playing the repressed 17-year-old coming of age under the apt tutelage of masterfully has-been actress Walters. Their relationship is a thing of intricately problematic beauty, and both play their parts with brilliant authenticity.

You know, it's funny watching "Ron and Mrs. Weasley" function in a different arena. It is as if Grint, in this gem of a film, is living under the stairs on horrid Privet Drive and is trying to find his way to the wholesome environs of The Burrow. I am feeling optimistic about Grint's chances to go on and do good work once the HP franchise has run its course.

Last but certainly not least: Whoohoo! I want to see more of Michelle Duncan. Makes me want to jump on a plane for Scotland : )