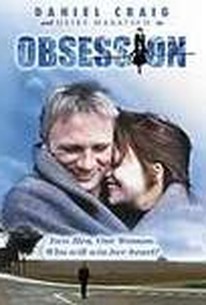 In order to solve a family mystery, John, a stonemason from Zimbabwe, travels to Berlin to search for 1928 footage of a tightrope walker at Niagara Falls. While there, he becomes romantically obsessed with Miriam, a French rock musician in an all-girl band. Unfortunately, Miriam is totally in love with her boyfriend Pierre, a talented scientist. Running parallel to the main plot is that of Jacob, a Jewish tailor who in the film's early scenes is caught shoplifting, an act that will have troubling ramifications for John, who gets caught in the middle of Jacob's attempt to flee the crime scene. ~ Sandra Brennan, Rovi

Daniel Gélin
as Xavier
View All

There are no critic reviews yet for Obsession. Keep checking Rotten Tomatoes for updates!

There are no featured audience reviews yet. Click the link below to see what others say about Obsession!