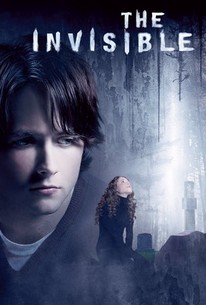 A severely beaten teenager, trapped in a walking purgatory between life and death, must help authorities to the location of his broken body before it's too late in this remake of the 2002 Swedish thriller Den Osynlige. Graduating senior Nick Powell (Justin Chatwin) has plans to attend a prestigious writing workshop in London, despite the protests of his widowed mother (Marcia Gay Harden). In the days before his departure, he gets into a cafeteria brawl with a delinquent classmate, Annie Newton (Margarita Levieva), while defending his friend from her extortion attempts. Annie and her crew track Nick down on the night he's planning to leave, mistakenly thinking he ratted her out to the police regarding a smash-and-grab burglary committed the night before. When the subsequent beating goes too far, the assailants dump the body in the woods in a panicked attempt to dispose of it. Only, Nick isn't dead -- he's walking invisible among his classmates, friends, and family, desperately trying to alert them that he's still alive. Robbed of the traditional forms of communication, Nick must figure out supernatural methods of manipulating his environment -- and he soon realizes the very girl who attacked him may be the only one who has the power to save him. ~ Derek Armstrong, Rovi

Critic Reviews for The Invisible

Teen angst is teen angst whether it's DOA or MIA, and c'mon, if you really want to go all Swede-emo on us, you're always going to run up against the immovable cinematic woegasm that was Ingmar Bergman. Never a smart move, that.

My screening presented the final reel upside down and backward; no difference whatsoever.

Director David S. Goyer doesn't get half the skin-crawling mileage out of the ghost factor that he could. As a result, The Invisible really isn't worth seeing.

They should have called this Perturbia.

The drama never comes together in a smart, meaningful way; indeed, most revelations border on the banal.

If anything, the movie is too introspective, to the point that it doesn't build enough conflict or tension.

Yes, it's a great premise, but the execution was very weak.

Director David S. Goyer turned the familiar sights of our fair city into a seething battleground for vampires in 2004's Blade: Trinity, but his latest Vancouver-shot supernatural flick doesn't have nearly as much bite.

...has been designed to appeal solely to the coveted "tween" demographic...

Never satisfying no matter what genre it attempts.

Audience Reviews for The Invisible

The same characters, locales (and target demographics) as the Twilight series ... but a ghost is the supernatural tie-in instead of vampires. Teen angst, misunderstanding, and a alt music soundtrack work to build to a crescendo of blossoming love that doesn't bear scrutiny nor was intended to.

Surprising with it's lack of emotional distance, and excessive violence and hostility, Chatwin is a perfect teenager going through an out of body experience, and Margarita Levieva is a rising star through the sensibilities she comes to terms with, and the path she knows she must tred. Imaginative as well.

Pofaced nonsense which takes itself way too seriously but crushily makes up then brakes its internal logic for the afterlife at will which destroyed any suspension of disbelieve. It stumbles along predictably and I only kept watching to see if it got more unbelievable.

i actually liked this movie. B