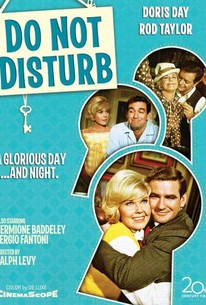 Do Not Disturb Photos

Doris Day and Rod Taylor star in this romantic comedy as Janet and Mike Harper, a married couple who relocate to England when Mike is transferred by the company for whom he works. While Janet and Mike seem to be happy together, the trip across the pond seems to bring on a case of the Seven Year Itch; he has his head turned by his new secretary, while she meets an amorous antique dealer. While the Harpers both begin to see the error of their ways, will they both retreat in time to save their marriage? The supporting cast includes Hermione Baddeley, Reginald Gardiner, and former presidential press secretary turned journalist Pierre Salinger. ~ Mark Deming, Rovi

Critic Reviews for Do Not Disturb

Lightweight almost to the point of distraction...

Audience Reviews for Do Not Disturb

There are no featured audience reviews yet. Click the link below to see what others say about Do Not Disturb!

Do Not Disturb Quotes