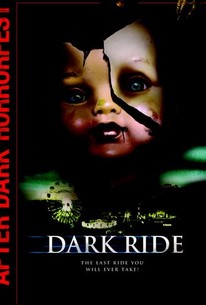 Years after two twin sisters are brutally slain in an amusement park funhouse, a group of college students find that death still stalks the long abandoned house of horrors. When police began investigating the disappearance of two twins who entered Dark Ride and never came out alive, the discovery of fourteen mutilated bodies quickly prompted them to shut down the popular amusement park in which the ride was located. Now, years after the fact, the once vibrant park has become a darkened, silent monument to the horrors of the past. When a group of college students decide to break into the park and tempt fate by taking the Dark Ride for one last spin, the murderous force that lay dormant for so many years returns to continue the killing spree that shook the local community to its very core.

Dave Warden
as Jonah
View All

When Dark Ride goes for the throat, it has some fun. The rest of the time it's rather insulting.

Competently made yet awfully dull...

There are bursts of slasher movie greatness in Dark Ride.

"This is MY fault, don't you get it? I brought us here! i have to find the others. go get help!"

While I LOVE the idea of "Eight Films To Die For" projects...I have yet to see ONE that was truly original, groundbreaking or anything more then slightly creepy. I had high hopes for this one as I've always found carnivals inherently creepy, funhouse's and "dark rides' almost as much as the people who usually run them. And this film also had Jamie-Lynn DiScala going for it. But alas (aside from a few creepy ride props) there was nothing new or remotely interesting about the story or the way in which it was told.

Boring. A chore to watch and a plot that's thin by even horror movie standards.

One of the Better if not my favorite 8 Films to Die for series. But for some reason the plot seems familer as if someone else has done it, but I love Parks with rides so this one I enjoyed, so will you. A Buyer