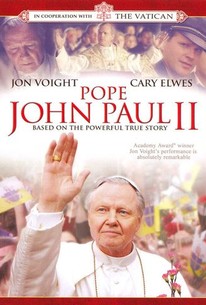 One of several dramatized tributes to the late pontiff to be telecast in 2005, the two-part CBS biopic Pope John Paul II is a remake of a popular Italian miniseries, and was filmed on location in Italy and Poland. The film begins with the attempted assassination of the pope on May 13, 1981, whereupon the story of the man once known as Karol Wojtyla is unfolded in flashback. The familiar highlights of Pope John Paul II's life and work are vividly realized: his early theatrical aspirations, his staunch resistance of both the Nazis and the Communist party in his native Poland, his meteoritic rise through the church ranks (at 38, he was his country's youngest bishop), and his ultimate ascendance to the Vatican throne in 1978. Also, this is one of the few English-language films to officer a meticulous recreation of the papal election process. Throughout much of the film, the pope's career is firmly linked with that of his countryman, Polish labor leader Lech Walesa; it can be inferred that without the input of both men, Poland would never have freed itself from Communist domination, nor would the Soviet empire have ultimately fallen. Cary Elwes plays John Paul from ages 18 through 50, whereupon Elwes morphs (quite literally, thanks to a brief -- and controversial -- special-effect sequence) into Jon Voight, who takes over as the older pope. Pope John Paul II was first telecast in two parts on December 4 and 7, 2005.

There are no critic reviews yet for Pope John Paul II. Keep checking Rotten Tomatoes for updates!

There are no featured audience reviews yet. Click the link below to see what others say about Pope John Paul II!