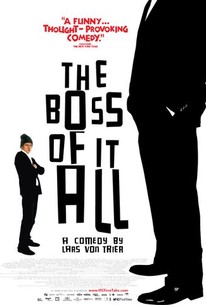 Critics Consensus: Director Lars von Trier ditches the pretensions but keeps his misanthropy in The Boss of it All, a surprisingly sharp and witty comedy about office life gone haywire.

Critics Consensus: Director Lars von Trier ditches the pretensions but keeps his misanthropy in The Boss of it All, a surprisingly sharp and witty comedy about office life gone haywire.

Critic Consensus: Director Lars von Trier ditches the pretensions but keeps his misanthropy in The Boss of it All, a surprisingly sharp and witty comedy about office life gone haywire.

The Boss of it All (Direktøren for det hele) Photos

Lars von Trier's black comedy The Boss of It All (Direktøren for Det Hele) concerns an IT company owner who -- in need of a figurehead to "hide behind" when confronted with employee problems -- invented the personage of a CEO during the startup period for his corporation. The scheme worked for a surprisingly long period, but when the time arrives to sell the business, massive problems arise -- for the prospective buyers insist on only negotiating with the CEO, in person. Thus, the owner further extends the ruse, by hiring a down-and-out actor to impersonate the chief officer. With Direktøren for Det Hele, von Trier uses a new means of filmmaking for this film: Automavision, whereby filming is done with an "automatic randomized camera" that selects the shots. It became a means for Von Trier to "clean up" his approach to directorial work and reconnect with his own love of filmmaking. ~ Nathan Southern, Rovi

Mia Lyhne
as Heidi A.

Anders Hove
as Jokumsen
View All

A bit of a shambles, but perhaps in its lack of von Trier's usual pretensions will lie the charm of this film for some.

Von Trier has evidently been watching The Office, and replicates both its soulless setting and fly-on-the-desk camera-style, not to mention the Brentian fear of being unpopular.

The script and story are what matter. They are as neat and interlocked as nail scissors. They are also grimly funny.

Von Trier may be commenting on the mechanical, dehumanised nature of corporate decision-making, or of Hollywood filmmaking. Maybe he's just being whimsical. It's always hard to tell with this joker-provocateur. And always completely fascinating.

In some ways, I enjoyed this movie more than any of his features, and yet it's sad that he has drawn in his horns so much.

Despite roguish interventions from Von Trier himself (in voiceover, and on screen), the movie has more in common with Working Girl and Trading Places than anything from Europe's leading auteur. Which, it seems, is a lucky, liberating thing.

A fresh, nimble-footed departure from one of the world's greatest living directors.

If The Boss of It All is forgettable, it's not for its airiness, but for its failed artiness, and for von Trier's failure to be true to his art.

Full of in-jokes for Von Trier fans and oddly shot, the quirkiness will probably be lost on those unfamiliar with the Dogme 95 man's work.

Less contentious than typical Von Trier but also less satisfying; fun but perhaps too stiflingly clever to allow the comedy room to breathe.

For all the sleights of hand its director conjures up, this is an undeniably slight affair. But it's still a sublimely entertaining one from a maverick confident enough in his abilities to make fun of his previous work and his agent provocateur persona.

I think The Boss of it All is the only von Trier film I truly dislike. Breaking the Waves was another, initially, and though I definitely still have my misgivings about it a second viewing sort of brought me around on the film's merits. This is a marginally clever treatment of viewership and an unconventional look at comedy in general, but in the scope of his filmography I don't think it really offers anything new. The idea of him creating a comedy so heavily reliant on cliche that he himself has to apologize through narration for the film is sort of interesting, but the novelty doesn't sustain 98 minutes' worth of viewing. It's funny how intent can so radically change a comedy's reception. This is, all told, the most generic office comedy of errors you could possibly imagine, and some people seem to think it's exceptionally funny. It's really not even remotely on its own terms, with von Trier's lampshading providing the only real chuckles, and even that isn't all that inspired. Not recommended, unless you're hellbent on watching all of his films.

Disappointing update to the Dogme school restrictions with an automavision shooting system. Von Trier may have found it an interesting technical exercise but it added nothing to the format for me. The sense of humor is assumably hilarious in Denmark but it didn't tickle me. The plot loses its tenuous grip on reality altogether at the end.

[font=Century Gothic]"The Boss of It All" is a surprisingly deft comedy by Lars von Trier about an actor, Kristoffer(Jens Albinus), who is hired to impersonate the imaginary boss of a software company by the real boss, Ravn(Peter Gantzler), to seal a deal.(Ravn invented the imaginary boss, so none of the tough decisions would be blamed on him. He just wants to be liked, like everybody else.) But the meeting goes awry, and Kristoffer has to keep the charade up for a week, while the deal is completed...[/font] [font=Century Gothic][/font] [font=Century Gothic]Along with being a critique of corporate culture, "The Boss of It All" is also an example of Lars von Trier taking aim at actors.(To be honest, I've never known any director to have a kind word about actors.) But he also turns the camera on himself, quite literally in a couple of instances, and by admitting the thinness of Ravn's plan(yes Kristoffer is a bit of a numbskull, but he definitely could have used more information to go on), he also admits to the weaknesses in his script which does not have an especially strong plot and the ending is rather awkward. [/font]

The Boss of it All (Direktøren for det hele) Quotes