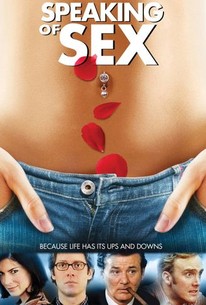 Wild Things director James McNaughton explores the doomed efforts of young couple to salvage their failing marriage in a dark romantic comedy starring Bill Murray, James Spader, Jay Mohr, Melora Walters, and Catherine O'Hara. In the grand scheme of things their relationship has only just begun, yet everything seems to be falling apart for a once-loving couple whose marriage has hit the skids. Despite the best efforts of an insightful marriage counselor, a depression expert, and two well-heeled attorneys, what was once an attempt at preserving their relationship soon devolves into a heated series of random affairs.

Hart Bochner
as Felix
View All

Critic Reviews for Speaking of Sex

By the time Bill Murray and Catherine O'Hara show up, you'll be knee-deep in your own hatred for this movie. That the pair somehow earn some laughs only makes one pissed that they weren't the stars of the film.

Audience Reviews for Speaking of Sex

There are no featured audience reviews yet. Click the link below to see what others say about Speaking of Sex!