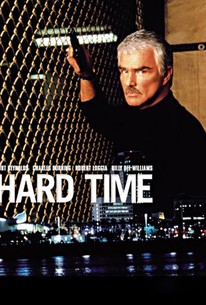 Former Evening Shade costars Burt Reynolds and Charles Durning are reunited in this made-for-TV action thriller, the first entry in a three-picture deal between star-director Reynolds and the TNT cable network. Framed for murder after a botch stakeout, maverick cop Logan McQueen (Reynolds) escapes from maximum security and heads to Miami in search of the man who set him up. He is hotly pursued by the minions of a politically ambitious DA (Billy Dee Williams), who sees McQueen's capture as a stepping-stone to the governor's mansion. The film is so spectacularly violent that the cameo appearance by pro wrestler Rowdy Roddy Piper seems a model of decorum in comparison. And Durning? He plays McQueen's ageing partner, as fast with a quip as with a gun. Originally telecast on December 13, 1998, Hard Time was followed by a brace of sequels.

Danny Arroyo
as Pepe
View All

There are no critic reviews yet for Hard Time. Keep checking Rotten Tomatoes for updates!

There are no featured reviews for Hard Time at this time.