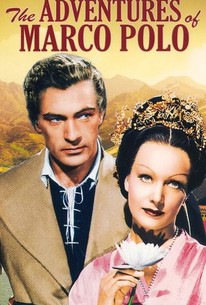 The Adventures of Marco Polo Photos

This epic adventure chronicles the many exploits of the great 13th-century explorer. Along with his men and his cowardly sidekick, brave Polo endures shipwrecks, terrible sandstorms, and other natural disasters as they wend their way East. Once there, he is taken to the exotic court of Kublai Khan where the explorer falls in love with the beautiful princess, who an evil conspirator with eyes on the throne wants for himself. The power-mad, avaricious usurper will do anything to have that throne and many people die painfully at his cruel hands. He tries to get rid of handsome Polo by banishing him to the outlands where the Venetian meets a spirited bandit ruler. Polo talks the fun-loving thief into helping him invade Pekin to save Khan from the traitor. An enormous cavalry attack is launched against the great walled city. They are not stopped by the many arrows of the villain's warriors. Polo vanquishes them when he uses his new invention --gun powder-, and blows the evil doers to kingdom come, freeing the captured Khan. He engages in a thrilling sword fight with the villain and kills him. Polo then gathers the lovely princess into his arms and romance ensues. A young Lana Turner played one of the princess' handmaidens.

James B. Leong
as Tartar Warrior

Critic Reviews for The Adventures of Marco Polo

The latest Garbo, Sigrid Gurie, is something to gaze upon.

The Adventures of Marco Polo is rather oddly cast... But it provides thrills, spectacle, intrigue, stunning sets and high romance, and shouldn't be missed.

Gary Cooper is appealing as the legendary explorer, but it's Basil rathbone who steals the show as the villain in this fictionalized biopic.

As soft as boiled pasta.

Audience Reviews for The Adventures of Marco Polo

There are no featured audience reviews yet. Click the link below to see what others say about The Adventures of Marco Polo!

The Adventures of Marco Polo Quotes