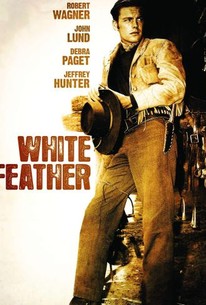 Unusual for its time, this 1955 film is a sympathetic treatment of the U.S. Army's resettlement of Native Americans in the Old West. The Cheyenne tribe agrees to leave its hunting grounds in Wyoming so that white settlers looking for gold can move in. Colonel Lindsay (John Lund) is in charge of the troops carrying out the resettlement journey. He is helped by an experienced land surveyor, John Tanner (Robert Wagner). Cheyenne tribesmen Little Dog (Jeffrey Hunter) and American Horse (Hugh O'Brian) are friends with Tanner and helpful in the resettlement -- at least until Little Dog's fiancée, Appearing Day (Debra Paget), takes a liking to Tanner. The attraction threatens to scuttle everything, and the tribe sends an arrow with a white feather as a declaration of war. Tanner convinces tribal leader Chief Broken Hand (Eduard Franz) to allow the men to settle the matter themselves.

An eye-filling widescreen western, recommended for youngsters and tolerable for adults.

Sympathetic to the Indian plight.

There are no featured audience reviews yet. Click the link below to see what others say about White Feather!