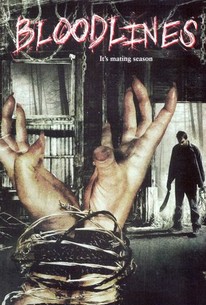 A deranged, inbred Kentucky family attempts to "clean up" their tainted family tree by bringing in some new blood in this backwoods shocker starring Grace Johnson and Jason Padgett. Billy Bob Hackford (Padgett) abducts women with a little help from his sadistic kin, and forces them to fight to the death in order to select the strongest one for breeding. The clan makes a fatal mistake, however, when they abduct Amber Strickland (Johnson) -- a tough-talking tomboy with strong Southern roots. A formidable huntress raised in the Alabama wilderness, Amber quickly escapes from Billy Bob's clutches and makes her way deep into the woods with malevolent siblings Bear and Brody hot on her trail. Now, as the fight for survival begins, the once-serene hills will erupt into a bloody massacre of violence and death.

There are no critic reviews yet for Bloodlines. Keep checking Rotten Tomatoes for updates!

There are no featured audience reviews yet. Click the link below to see what others say about Bloodlines!